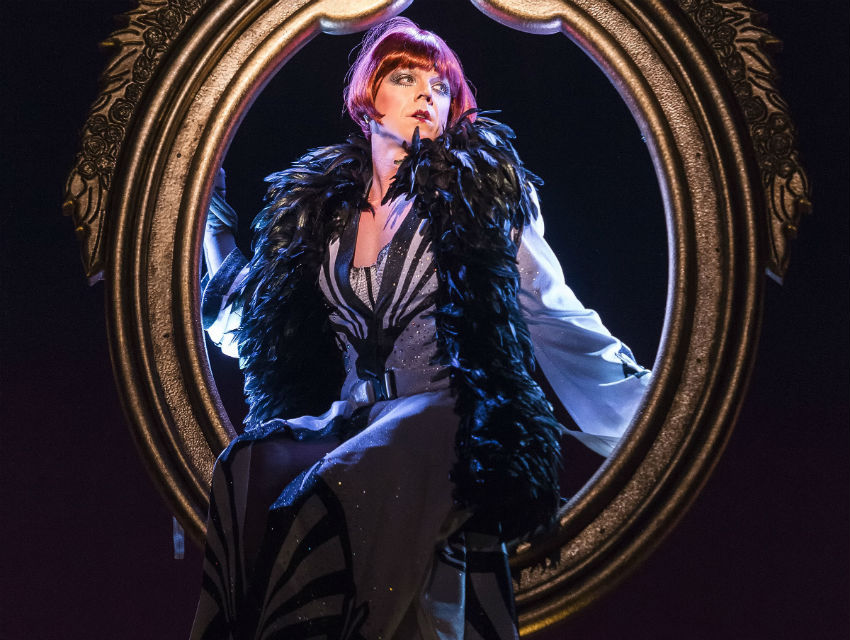 “I’m not an actor. I can’t act. At all.” That was how Jake Shears, the lead singer of the band Scissor Sisters, responded to a question in 2009 about the possibility of his acting in a musical he had written based on Armistead Maupin’s Tales of the City. Fast forward six years and his perspective has changed. Shears is appearing as Greta in Moisés Kaufman’s new production of Bent, written by Martin Sherman. The show is now playing at the Mark Taper Forum.

“I think that was maybe still the case when I walked in the first day of rehearsal,” Shears says during previews of the show. “I don’t think that’s the case now, just from what I’ve learned from Moisés and everyone around me. It’s felt like I’ve just had the most amazing first-person education about acting from an amazing man; a very talented director.”

Bent takes place in Germany in the mid-1930s. Max (Patrick Heusinger) is dating Rudy (Andy Mientus), a dancer at a nightclub owned by Greta (Shears). When the Gestapo invades Max and Rudy’s apartment, they are forced to flee knowing that the SS is not only rounding up Jews, but also homosexuals. Greta is the first person they turn to for help.

“Greta is a businesswoman,” says Shears of his character. “I think Greta is a gay guy who came up in the clubs and ended up owning his own club. I think Greta’s wife is probably a lesbian herself that he met through the clubs. They could live their lives, they could do what they want on the side, but also have this basic cover to make life a little bit easier.”

All the backstory he has created is important for Shears to portray Greta. “You are just getting a little slice of this person,” he offers. “It’s four pages. I guess all the blanks you are filling in yourself. This character is tough. She’s not a nice person at all. I wouldn’t call her an opportunist. She’s a fucking bitch.”

In the play, Sherman wrote lyrics for a song called “Streets of Berlin,” which is how Greta is introduced. But he left the music up to the individual actors and productions. “I love the fact that there’s always a new song,” Shears says enthusiastically. “Moisés wanted it to sound very period, very Kurt Weill-esque. I already have that in my musical vocabulary. I wrote it with Lance Horne. It’s period, but it’s got my stamp on it. I think it could easily, and has been, a torch song. But I switched it up to have these very slow, sultry moments. Then it breaks out in a Liza Minnelli extravaganza.”

Scissor Sisters, Shears reveals, isn’t currently making music together. “We will do another album someday,” he says. “I’m going to make my own record first.” He’s also writing a new musical with Elton John. “He’s just a very loving, nurturing, inspiring man. He made me get a little teary the last time we got together. He sat me down and told me why we were working together. It was really emotional and wonderful. I’m super proud of what we do together.” This isn’t their first collaboration. Elton co-wrote the Scissor Sisters song, “I Don’t Feel Like Dancing.”

With so much on his plate, does Shears foresee acting again in his future? “I think Bent has shown me the kind of divine pleasure of going ahead with something even though it might be really scary. I want to be able to apply this to other things in my life that freak me out. It’s been one of those things where I’ve said, ‘I can’t’ for years, and now I can say, ‘I can.’”