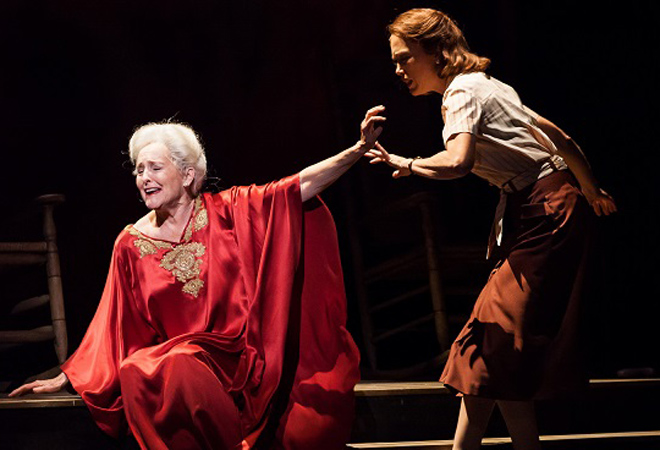 Semi-retirement is an interesting concept as practiced by mezzo-soprano Frederica von Stade. For “Flicka,” as her fans call her, this period of semi-work has revolved primarily around charitable endeavors in and around Oakland, California and performing new works by contemporary composers. Among those works is A Coffin in Egypt, a chamber opera written by Ricky Ian Gordon (“The Grapes of Wrath”), which opens tonight at the Wallis Annenberg Center for the Performing Arts.

Based on the play written by Horton Foote (“The Trip to Bountiful,” “The Orphans Home Cycle”), A Coffin in Egypt tells the story of 90-year old Myrtle Bledsoe. Her husband and daughter have passed away as have many of the residents of Egypt, Texas. Over the course of nearly 90 minutes, Myrtle must accept the truth she has tried desperately to ignore and outlive.

“There was a request that this particular play not be performed until [Foote] was dead,” von Stade says. “It isn’t that he’s negative about people, but he’s very honest about them. There’s an element of it that’s almost like a diary. What I love, too, is he doesn’t make a judgment. They aren’t good or bad people; they are just people.”

Does Foote’s writing lend itself easily to opera?  “Yes, I think so,” she says. “The hardest thing when you’re singing in English is to make sure everyone gets the nouns and the verbs. If they are too far apart, that doesn’t happen. He writes in a clear way. You know exactly what he means. His choice of where he goes from one sentence to the next and what takes him there is so clear. I think that’s fantastic for opera. In this piece, the text is 90% of it. And Ricky writes enough beautiful melodies that you want to show them off.”

The arc of Myrtle’s character allows von Stade to go from anger to acceptance. “The way it’s written, there is an apex. There is a moment when she comes finally to the place of realizing: The only person I have to forgive is myself.” It’s at this point that von Stade starts talking less about the character and more about herself. “That’s the difference between being 45 and 65. There are certain things that aren’t going to change. It doesn’t mean you stop trying. I think that’s what wisdom or peace is.”

At no point during the opera does von Stade leave the stage. If that’s daunting for some people, it doesn’t concern her. “It didn’t feel like a challenge because Leo Foglia has written such a clear libretto that it’s very easy as a performer to get swept up in the story of it. When I finish the ‘sections,’ I’m constantly trying to find what is the clearest path to the next one. I love the American idiom. I love singing in ‘American’ and singing about American people, trying to explore this generation of woman.”

When she’s not performing, von Stade works to expose underprivileged youth in Oakland to music. “I work with two groups in Oakland and they are working with young people who don’t have a lot of money to get to know music and get exposed to it. It’s been great to spread the word about what we have to do now to help each other and especially people who have so little.”

Where does von Stade think another 10 years of “semi-retirement” will take her? “More fundraising for these things that I believe in. I’ll sing if someone asks me. I’m not a fool. I’m not going to be asked a lot but I’m going to say yes if I am. You learn a lot saying yes to projects that formerly you might have said no to.”