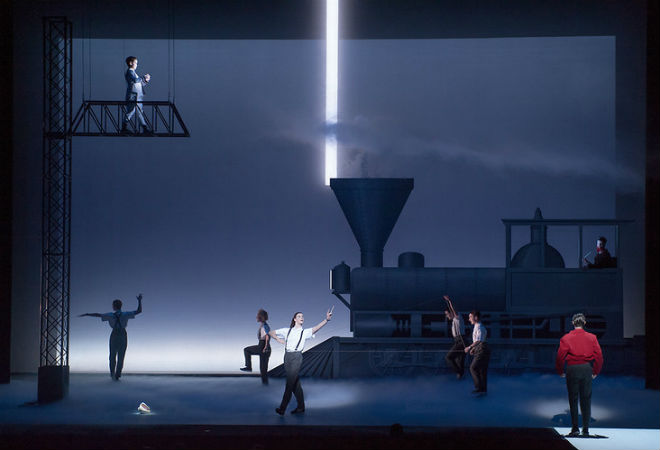 It’s a busy time for director Robert Wilson, So busy that he had to conduct our interview by email as he was jetting between rehearsals and other engagements. Among those commitments is Einstein on the Beach, a lengthy, four-act opera he created with composer Philip Glass that plays at the Dorothy Chandler Pavilion this week, and John Cage’s Lecture on Nothing at UCLA next week.

Given his hectic pace—and that of audiences—isn’t it asking a lot to expect people to sit through a four-and-a-half hour show without an intermission? “I think people are looking for an alternative to the fast pace of everyday life and entertainment,” he said. “It is curious to me that the public who frequently expect immediate response, can get lost in such a work as Einstein since there is no one way to think about this work. It does not have to have a meaning; it is what it is.”

Einstein completes it U.S. tour in Los Angeles; after additional European dates, it will mark the last time Wilson and Glass will be involved with any productions. Why now? “I was curious to see how a young public would respond 37 years after it was originally made.” When asked of any changes made to the work, he offered only “light instruments are very different from what we originally had. So the color is very different.”

Wilson was keen to discuss composer/writer John Cage whose Lecture on Nothing, first delivered in 1949 and published more than a decade later, “has become a bible for me,” he says. “When I read his book Silence in the early ’60s, my life was completely changed.  That you could read it from the middle to the end, from the end to the beginning.  There was no one way to read through it.”

“Cage’s philosophy was one of the most influential of my career. He introduced me to Eastern philosophy. Zen and Buddhism. I met Cage in the early ’70s in Minneapolis. I spoke to him about the possibility of reading publicly the text.”

As for the City of Angels, where Wilson has been involved with LA Opera and saw his collaboration with Tom Waits, The Black Rider, appear as part of the Ahmanson season in 2006, he finds reason for optimism. “I have seen in the last 30 years a tremendous change happening in Los Angeles, especially in regard to modern music and classical music. They have built and found an audience, and it is very exciting.”

Time will tell how audiences will respond this week. When asked what he thought Cage would think of his staging of Lecture on Nothing, Wilson replied, “I hope he would laugh.”