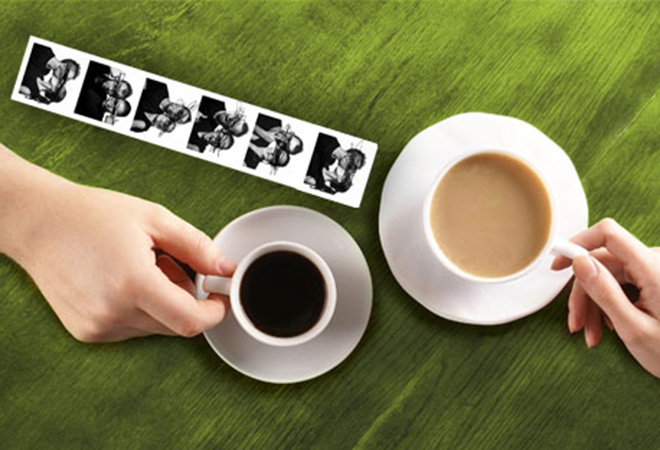 The 2012 movie Ruby Sparks told the story of a writer who begins a story about a girl when she suddenly appears in flesh and blood. In the new play Trudy and Max in Love, the story revolves around two people who meet at a writer’s group, one a married author (Trudy) and the other a single writer (Max). Both projects spring from the imagination of playwright Zoe Kazan.

Kazan, who also played the title character in Ruby Sparks, does not appear in her play, which concludes its world premiere engagement at South Coast Repertory this weekend. “I usually start with a kind of image. In this case I had an image of a man and a woman on a bare stage,” she says. “I started thinking about how a love affair is like a play. You enter this sacred space alongside someone and apart from normal life. You transform in that space. You behave in different ways and when you leave, you leave behind everything but memories.”

When asked if the movie and the play have anything in common besides having writers as central characters, Kazan says, “There is overlap. But I think of them as being very, very different. Ruby Sparks was a musing on creativity and on power dynamics in relationships. I think of Trudy and Max as a memory play.  These are not the most important moments but they’re the ones you remember a few years down the line. It’s much more about two people growing up and coming to a new understanding of what love is.”

Audiences have been talking after the performances about the male/female dynamics in the play and who controls the relationship. Kazan loves hearing this. “I like the idea of people having independent thoughts apart from what I was thinking when I made it. That’s a good and interesting thing. I was thinking more about that these are two people who are irrevocably changed by each other. He is in a simpler position: He is vulnerable, he falls in love with someone. She is not available but that’s not his problem. Her problem is more complicated: loving two people at the same time and contemplating leaving someone. She is ultimately the person in the position of needing to make a choice. She’s our protagonist and that’s what they do. I think we’re more used to seeing the story where the male is the protagonist. This, ultimately, is more her play.”

Kazan, who plans to continue writing for both stage and screen, finds the two mediums to be different beasts. “I find writing plays much more challenging. There’s so much more onus on the dialogue and on the writer to move the story forward. In film you have all these other people who come in and make it better. In that kind of collaboration your blueprint is very important but it is only the first step in telling the story. With a play you don’t have that. Everything happens in real time. You’re not able to cut. The storytelling happens with your words and what the director does with the actors.”

In the closing moments of Trudy and Max, the characters discuss the concept of choice in a relationship. Not fate or destiny, but choice. Kazan explains, “I think choice is everything, really. This is part of what the play is about, which is how choice is an incredible burden as well. It’s a much prettier idea that everything is fate and you’re in the hands of the gods. But that’s not how I experience my life. I think part of the process of growing up is realizing that choice is incredibly freeing in every way. Being able to say not to a job or yes to monogamy. We have a lot of romance about the idea of fate and being swept away by something, and we don’t have romance about the idea of waking up in the morning and making your bed and choosing not to throw you life away all the time. My entire life is predicated on choice.”

When asked about what future choices she has for Trudy and Max in Love she responds, “I don’t know. I’ll let you know.”