Home Theater The Play That Supreme Court Justice Antonin Scalia Might Rule Against, Even... 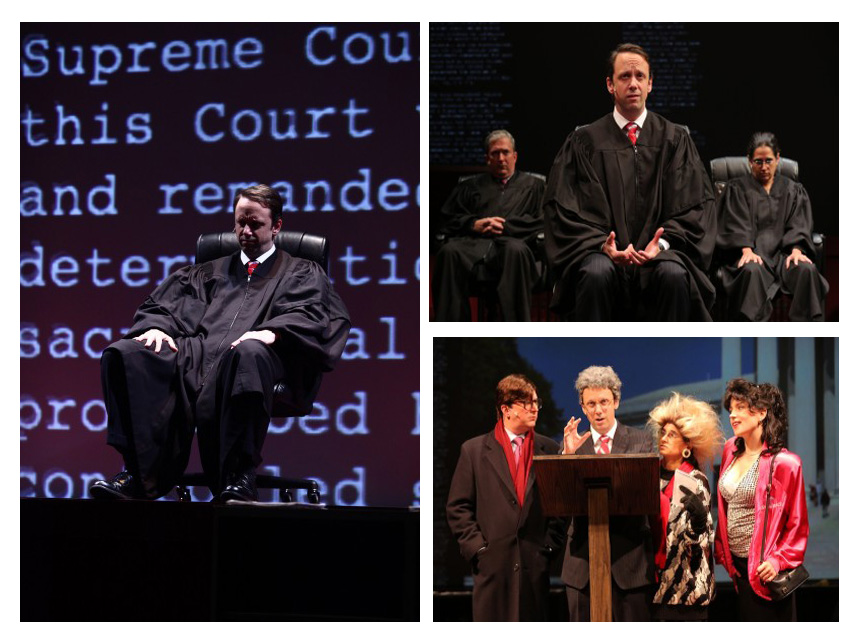 Books, movies, and TV shows have often served as fodder for plays but how about transcripts from the Supreme Court? New York-based troupe Elevator Repair Service, which visited L.A. a few years ago to stage Gatz, an eight-hour adaptation of F. Scott Fitzgerald’s The Great Gatsby, returns to town to present its latest production Arguendo. The show will run from November 6 to November 9 at the REDCAT in downtown.

Director John Collins explains how these arguments became a show. “I have a collection of downloaded recordings of Supreme Court oral arguments,” he says. “The way the arguments take place is much less dry than you would think. In the course of looking at other arguments [related to fair use rights as it pertained to Gatz] I found this one. When I listened to this particular argument, it had theatrical potential. The argument itself is a little bit absurd. Supreme Court Justices debating what effect pasties and g-strings have and whether or not this kind of dancing is some form of art or expression. There’s great humor in the case.”

Though it sounds like a hybrid of argument and innuendo, “arguendo” is a real legal term. “The name is a Latin word for the sake of argument and they use it in the argument,” Collins says. “Some people think we made it up; that’s a bonus for us.”

How did Collins and Elevator Repair Service turn these arguments into theatre? “We realized we had a responsibility as theater makers to test some of the ideas that are there in the arguments. For example, we had to have nude dancing. I wanted to reference the real physicality of the court: the arrangement of Justices on the bench, how they sat in their chairs and gestured with their hands.”

What does this case tell us about the way the Supreme Court works? “One thing it tells us is something about the way the relationship the Supreme Court and the law have to art,” Collins offers. “If you follow this case all the way through to the opinions, the court was genuinely confused by this case. In oral arguments you are hearing the Justices think out loud. They are using the advocates to try out their own ideas and test each other. You get to see what a complicated puzzle they have to solve, which involves not just the facts of the case or the text of the Constitution but all the other decisions they’ve ever made.”

What did the Court ultimately decide? They didn’t actually render a definitive conclusive decision in this case, though they ultimately decided marginally against the dancers. Justice Antonin Scalia, who is still on the Supreme Court, had a unique way of viewing the case. “He has a couple of great outbursts in arguments when he says ‘Nobody is stopping her from dancing; they are just stopping her from being nude,’” Collins say.

So far Scalia has not seen Arguendo, but Justice Ginsburg (who is depicted in a epilogue in the play) has. “We got to meet her and she invited us to visit in her chambers,” Collins says. “I think she had something to do with Justice Sotomayor, who was also wonderful, coming to the show. I wrote to all nine current Justices. I hoped that when Justice Ginsburg came she would convince Scalia to come, but I guess he had other plans.”