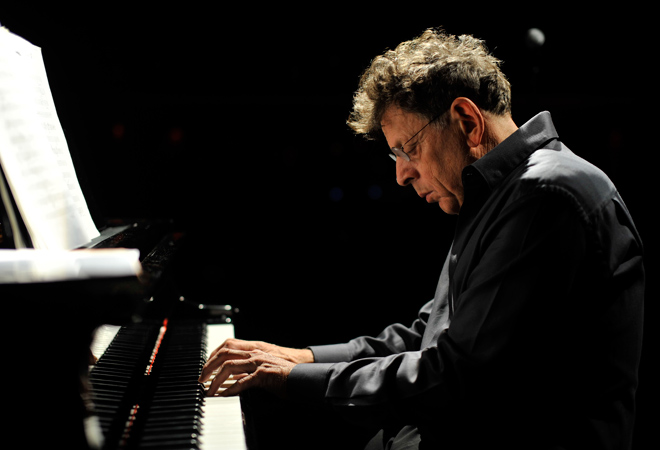 “I never thought of myself being able to make a living by dying,” says Philip Glass. 50 years after 1964’s “Brass Sextet,” the prolific 77-year-old composer finds that he has lived long enough to see his work embraced around the world. Beginning on Friday, Glass will appear in three different concerts at UCLA celebrating his work and that of the Philip Glass Ensemble.

Glass’s music has been recently performed in town: just a few weeks ago by the LA Philharmonic (the CIVIL warS – the Rome Section) and in October when LA Opera presented Einstein on the Beach. Glass finds much to admire in the city of angels these days. “There are artistic objectives that the city has taken on and they are meeting them, in the art world, in the music world,” he says. “The LA Philharmonic is a place you want to have your music played. It’s a young orchestra, they play it well, and they know who you are; that’s different than it was 40 years ago. It’s really a major art center. I think there’s no question about that.”

His music, once considered avant-garde, has entered the mainstream. What’s it like for a composer to see such a radical shift during his career? Glass takes a big picture approach to the question. “These things have such a large cultural context. Almost any place you look there have been remarkable transformations in the last 25 years: science, music, art literature, politics, modern social anthropology. I don’t think they are related, but we all experience changes in these areas. This is a big topic. I wanted to open it up this way because I didn’t want to look at the transformation of my audiences and my music as if it were a private affair. It’s not; it’s a general social affair.”

“I think we understand it better from that point-of-view,” Glass continues. “I started off very early thinking in terms of the global culture. I’m talking about the late ’60s when Ravi Shankar opened the door that led me to hear music in a different way. It led me to think of music as a global language and not a parochial one. What I’m seeing is when you first throw a stone in a pond and seeing that ripple getting quite far away from the stone and where it landed.”

That ripple effect happened faster than Glass anticipated. “To be truthful, I was surprised at how rapidly it changed. In the mid -’60s into the ’70s, it seemed fast changing to us. I was surprised how rapidly it changed. [At the beginning] it didn’t look like we were anywhere near getting into the New York Times. [Los Angeles magazine] we would have thought that was very far in the horizon for people like us. Now it has accelerated beyond that.”

He does lament some ways in which the world has changed. “When I was in New York living, I could work three not-full days, 15 hours a week, and make enough money to support myself and go to school. That’s not possible now. We lived in a golden age. I had a day job until I was 41. I wrote Einstein on the Beach while I was driving a cab. I wasn’t bitter. I wasn’t angry. I thought that’s the way it was. There have been artists who knew that they were going to be discovered later and they died young. I was not one of them. Fame and glory we weren’t going to get it. I never got the Guggenheim or the MacArthur or a Pulitzer. I never needed them. I wasn’t disappointed because I had no expectations. It was a strange form of innocence.”

When asked if he feels the younger generation exhibits the same patience and perseverance that he did, Glass replies, “There is a younger generation, under 30, who are like people of my generation who are in there for the long haul. They are idealistic and aren’t looking for awards or prizes or that nonsense.”

“I’m a glass half-full kind of guy,” he continued, unaware (or was he?) of an obvious pun. “My kids make fun of me. I think things are better than they really are. But it has saved me a lot of anxiety.”