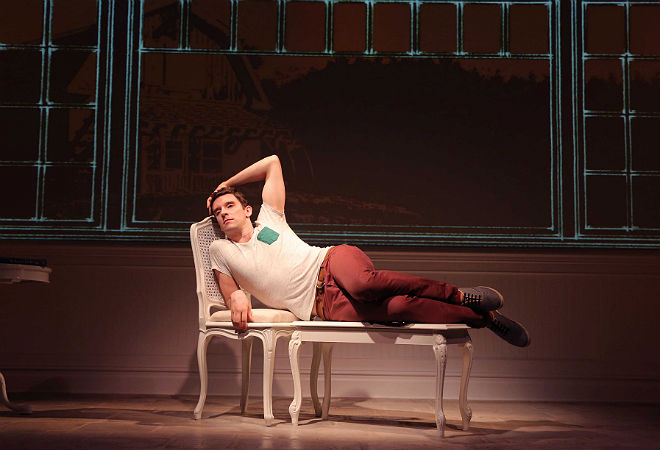 It’s a banner year for one-person shows in Los Angeles: Denis O’Hare in An Iliad, Christopher Plummer in A Word or Two, Daniel Beaty in The Tallest Tree in the Forest, Barry McGovern in I’ll Go On, Annette Bening in Ruth Draper’s Monologues. But the most off-the-wall one-man production stars Michael Urie (best known as the bitchy Marc St. James in Ugly Betty) in Jonathan Tolins’s Buyer & Cellar. Opening today and running through August 17 at the Mark Taper Forum, the play was inspired by Barbra Streisand’s book, My Passion for Design. In it she writes, “Instead of storing my things in the basement, I can make a street of shops and display them.”

In Buyer & Cellar, Urie plays Alex More, a young man who has recently been fired from his day job at Disneyland; he ends up running the underground mall where Streisand stores all the possessions she can’t fit into her Malibu home. It’s a lonely job with no one to talk to—until Barbra finally appears.

The show opened in March 2013 at the Rattlestick Playwrights Theater in New York before transferring to the Barrow Street Playhouse a few months later. Urie, who estimates he has performed the play more than 420 times, won the 2013 Drama Desk Award for outstanding solo performance.

“I’m not afraid of it anymore,” he says. “When I started, it was very scary. Even though I still get nervous that I’ll forget something or my mind will go completely blank, my muscle memory knows the play so well my brain can miss a beat and my body won’t.”

Urie, who spent two years shooting Ugly Betty in Los Angeles before that show’s relocation to New York, is glad to be bringing Buyer & Cellar to the City of Angels. “We spend 100 minutes watching someone at the very top of show biz and someone towards the bottom. That to me is L.A. When you don’t have a job in showbiz and you look at every billboard and every nice car and you can see without leaving the house what you’re missing. Everybody is a part of that.”

During the show’s lengthy run, Urie has discovered what it takes to keep a show going. “I never did a play for this long before, and I never imagined that I could. I have definitely learned that I’m capable of more than I thought I was in terms of stamina and freshness. There is something special about knowing the material and the characters as well as I do. I find things in ways I never knew were possible. It shows that I can be happy/sad, funny/serious, gay/straight, male/female all in one little play.”

Though he has appeared on Broadway (How to Succeed in Business Without Really Trying) and off-Broadway (The Cherry Orchard and Angels in America), Urie finds different challenges with the one-man format. “There’s isolation,” he observes. “You don’t have the emotional net of the other artists. The stamina and responsibility that one has to tell the whole story and not forget any piece of it, I’m responsible for that. Which is a different experience than being one cog in the wheel. Here I’m the wheel. The audience is my new co-star every night.”

One person who hasn’t been in the audience is Streisand. Perhaps she’ll never see the show. But what if she invited Urie to her home? “I would go and I would be gracious and thrilled and just in awe of her. Jon Tolins, who wrote the play, has always maintained that we appreciate her and respect her and treat her lovingly. I would love to meet her and thank her. Look at what she’s doing for my career.  I owe her. Plus, I might get some new tidbits.”