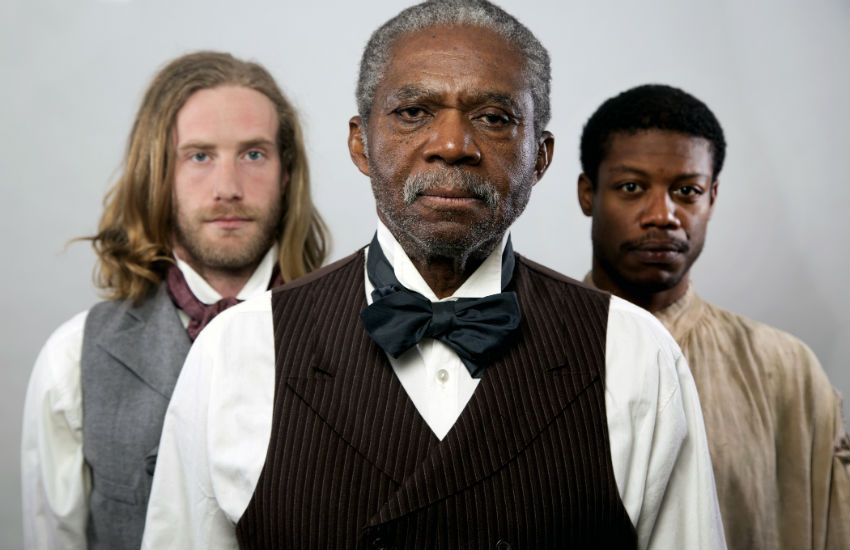 It was in the shadow of 9/11 and the invasion of Iraq that playwright Matthew Lopez began writing The Whipping Man. “Although this play is not about these things, it was certainly on my mind,” he says by phone from his home in New York. “If you look at the themes of destruction and renewal and the unexpected upheaval in the play, I think the writing is influenced by that great uncertainty that I and my fellow New Yorkers felt in those years.”

The result was a play that takes place just after General Robert E. Lee surrended at Appomattox to end the Civil War. It is April 1865 and Caleb (Adam Hass Hunter) has returned to the home his confederate family owned. He finds the house in shambles. He also finds now former slaves Simon (Charlie Robinson) and John (Jarrod M. Smith) there. Over the course of the play, all three men have to face the consequences of the past and a rather uncertain future.

First produced in 2006, The Whipping Man went on to be produced at New York’s Manhattan Theatre Club in 2001 garnering Lopez the Obie Award and Lucille Lortel Award for Best Play. Currently running at Costa Mesa’s South Coast Repertory through January 25, The Whipping Man will open at the Pasadena Playhouse on February 4.

Lopez is as surprised as anyone at the play’s success. “I had never written a play before,” he admits. “I didn’t even know I would be able to finish writing. I didn’t know if I had a play on my hands. My focus was so tiny which was simply let’s just write this thing.” As for the play’s success, Lopez says “I think that what the play allows people to do is to look at America 150 years ago and it invites comparison. It’s a way to allow audiences to sort of investigate for themselves where they think we are in the twenty-first century by looking at this great calamity of the nineteenth century.”

With recent incidents such as the killings of Michael Brown in Ferguson and Eric Garner in New York Lopez hopes The Whipping Man will offer a fresh perspective on race relations. “None of these things are isolated incidents. The Civil War didn’t end with Lee’s surrender. Racism didn’t go away with the emancipation of Slavery, the end of Jim Crow or the Civil Rights Act or the election of Obama. Those things are worth remembering. Not only are they linked historically, they vibrate on the same frequency.”

“One of the great things about the plays that I love, they assume that the audience is going to come along for the ride. [Playwright] August Wilson (Fences, The Piano Lesson) wrote about the African-American experience, but he never stopped to explain that experience to audiences. He simply expressed it as he saw it and how he interpreted it. He never apologized for that and never held audiences’ hands. His view was ‘this is the story I’m telling and please come and enjoy and partake’ and that’s a great way to approach an audience.”