Home Theater Curtain Call: The Manhattan Transfer Rolls On While Trying to Figure Out... 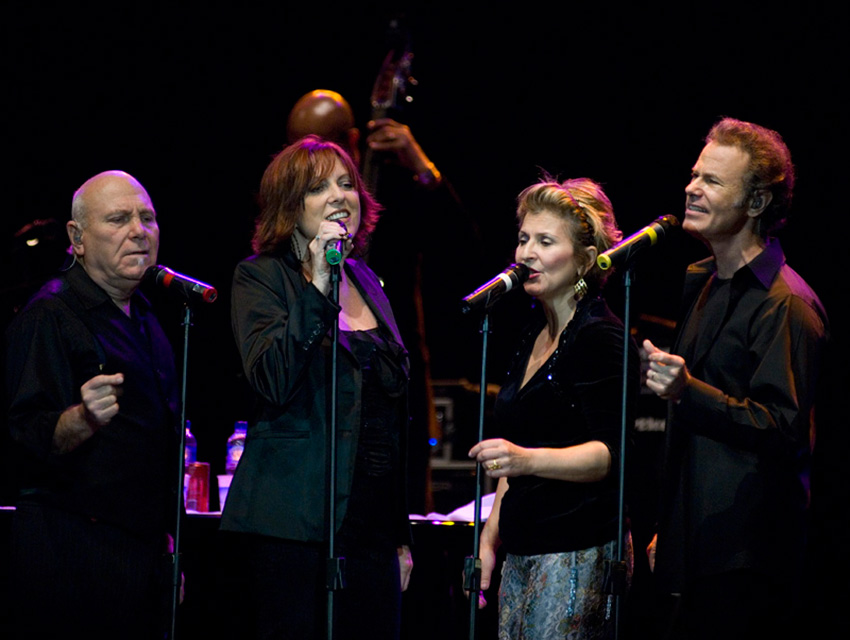 With the October passing of Tim Hauser, the founder of The Manhattan Transfer, it is a time of grief and transition for the vocal group’s three remaining members. Choosing to honor already booked commitments, like Tuesday’s Christmas concert at Disney Hall, was the first of many decisions the group faces. We caught up with member Alan Paul to talk about the group’s future.

“It’s been very hard,” he says. “We just came back from touring Japan and the audiences were wonderful, very supportive, very understanding. We’re grieving for Tim, for our partner. It was a long time that we were partners, but as musicians we do what he would want us to do which is continue. That is really how we celebrate, by going out there and singing.”

The Manhattan Transfer began life in 1972. Paul, who was co-starring in the original production of Grease on Broadway was recruited by original singer Laurel Massé’s boyfriend. The fourth member of the group is Janis Siegel. The group released their self-titled first album in 1975. After an accident in 1978, Massé left the quartet and was replaced by Cheryl Bentyne. Among their best known songs are “Twilight Zone/Twilight Tone” and “The Boy From New York City.”

Paul explains how they are coping without Hauser. “There were a couple periods when Tim was out because of his health and we had Trist Curless subbing for Tim. He’s with us for these shows. It’s hard. We pay honor to [Tim.] To be perfectly honest, I don’t know how we’re going to do this for the Christmas show and how we are going to present it. We’ll figure it out.”

Once their commitments are fulfilled, Paul isn’t sure what the future holds for Manhattan Transfer. “Come the new year we’ll finally have a chance to sit down and figure out what we’re going to do. The legacy of our music is going to outlive us. Where it goes in the future, I don’t know. Whether it ends with us or we set it up so it continues in name, I don’t know. I would like to see us continue.”

Paul explains the group’s legacy: “We took the torch from all the groups that came before us: The Pied Pipers, The Modernaires, Lambert, Hendricks and Ross, The Mills Brothers, The Boswell Sisters. We bridged a gap so that groups like Take 6 and Pentatonix were able to grab the torch from us and continue. That’s where I think we are right now, the elders of vocal groups right now.”

As for the holiday show, Paul says, “It’s going to be a very emotional Christmas, very heartfelt, not only for us but also for the audience. The people that come mostly understand what has gone down not only in the last couple of months with Tim passing but also the last couple of years. There was a time when Cheryl had to go out for a couple of years. What they are going to hear is the excellence of our singing. I hope they will really have a Christmas experience, because it’s not just about the superficialities and being jolly and everything but more about the depth of soul. We want to celebrate and celebrate [Tim’s] life.”