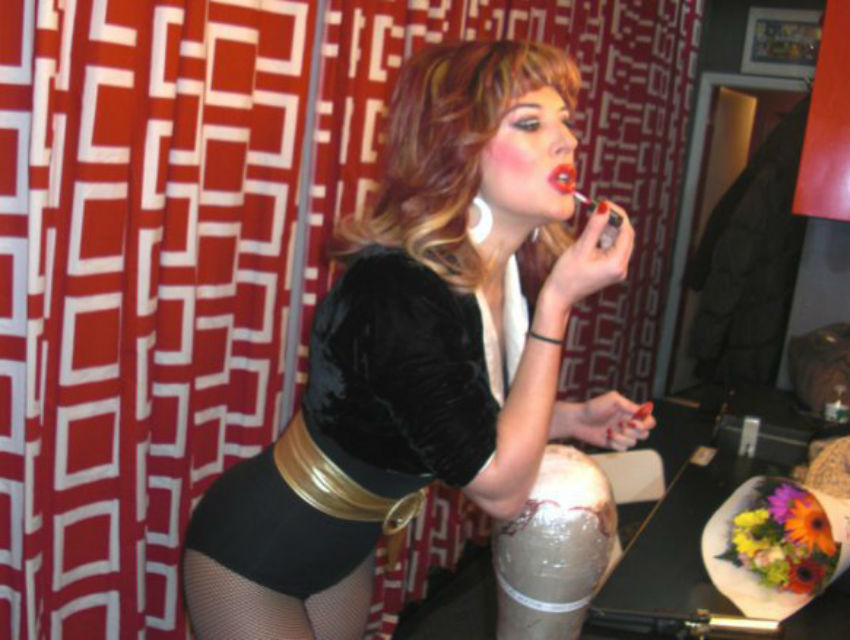 Actors are often putting together one-person shows. But for every Elaine Stritch: At Liberty or Billy Crystal’s 700 Sundays, there are shows that make you scratch your head and ask, “What were they thinking?” It is the latter type of show that Nicole Parker was thinking of when she created Suitcase Full of Lies playing tonight at Rockwell Table & Stage in Los Feliz.

In the show, the fictional Jillane Jenkins, onetime star of the 1970’s television show, She’s Got a Job! (also fictional) tells her life story. She reveals the highs and lows of her life in dialogue and music. And for Parker, who appeared on Broadway as Elphaba in Wicked and on television’s MADtv, it offers her and the audience the chance to have fun with the format.

“There’s a sentence in the show, ‘This show is all about me for you.’ That’s really the idea,” she says. She slyly references a show that served as inspiration. “All I will say it was definitely a once-in-a-lifetime experience. Someone who was a sex symbol. It was unforgettable. What I came away with more than anything is a woman who really believes she is fabulous and whether some of it came across or not, she was having the time of her life.”

Part of creating the show was creating the backstory for Jillane. “I do imagine in her backstory that there were a couple of years between leaving home and stardom,” Parker reveals. “I imagine her having failed marriages, some kids, some random hookups. It’s supposed to be very clichéd. She’s got some life under her belt that we don’t all know about, but I keep it in my mind. She’s in her 60s. She has lived. She knows who she is. She doesn’t apologize. That’s what I love about playing Jillane.”

Suitcase requires Parker to utilize both her singing and her improvisation skills. “There are two whole sections that are improvised,” she offers. “In the beginning I talk to people. If I address you, you can totally speak back. I try to get them involved right at the top. I have to maintain control and have the final say. I like that element that the audience can have a profound impact on the show on a different level than I was even expecting.”

She’s very clear where her most significant training came from. “I’d say one of the things that prepared me the most was Boom Chicago,” she says. “It’s an all-American sketch and improv group in Amsterdam.” Amongst notable participants at Boom Chicago were Seth Meyers, Jason Sudeikis and Ike Barinholtz. “Two-and-a-half years of doing that, dealing with all kinds of unexpected reactions, made it possible to get up on stage in a leotard and do this.”

So what has Jillane taught Parker about herself as a performer? “A confidence that I had to give myself that I don’t have myself. An extra sense of the fabulous. When I realized I had to come out with that really swinging, that’s something I learned from the character. The tightrope quality of this type of performance, you have to make it cool for everyone. Don’t worry, we’re going to have a good time. I’ve even added that as a sentence in the beginning of the show for me, Nicole. I’ve got this, we’re good and we’re going to have fun.”