Home Theater Curtain Call: Lorenzo Pisoni Grows Up in the Circus and Reveals His... 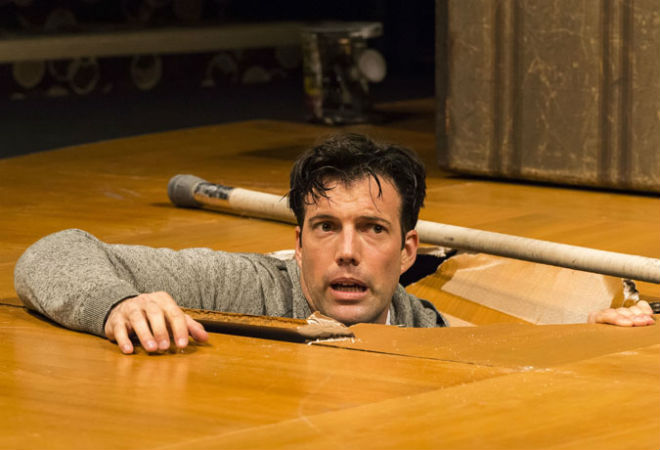 Lorenzo Pisoni tells us at the start of Humor Abuse, his one-man show now at the Mark Taper Forum, that he is not funny… seriously. Maybe he’s just clowning around, but he’s deadly serious about trying to understand his father Larry, who launched the Pickle Family Circus in San Francisco in 1974.  Larry also created the character Lorenzo Pickle, whom Pisoni depicts in the show.

“When we started this play in 2009, I was kind of upset that I didn’t know more about my dad and that really influenced the style the play has taken. It is a very spare script,” Pisoni said backstage before a recent performance. “Now I have a much more intimate understanding of his sense of humor. Professionally I got to know him a lot more, which is ironic since the play is about searching for who he was as a person.”

During his 5 1/2 year journey with Humor Abuse, Pisoni, who appeared on Broadway with Daniel Radcliffe in Equus and was recently seen in The Explorers Club at Manhattan Theatre Club, has realized how persuasive his parents were.  “People followed him into the fire. [My dad] was asking people—both my parents were—to travel around in tents, set up a circus in public parks, and do shows outside in the summer heat making no money. It was such a small set-up and the audience was packed in right up against the rail. As a performer you knew you were bringing a lot of joy to them for two hours. That was a drug unto itself.”

In Humor Abuse not every audience member gets to remain seated. They may find themselves pulled on stage to be part of the show. “When I come to that part of the stage, I start checking them out. That’s 45 seconds in. I try to find someone who is just the right amount of scared,” he revealed. “I like to be upstaged by someone who doesn’t do it on purpose. That’s fantastic. To get the sensation of being a part of the comic bit and receiving the laugh is great insight into being a clown.”

Humor Abuse will conclude its onstage life here in Los Angeles. “It is a little more fraught, a little more full. I don’t need to do it anymore like I did. To say nothing of the fact that I’m 36 and it’s time to stop doing back flips.”

What hasn’t changed is his desire to know more about his family. That’s why he has launched a Kickstarter campaign to finance a documentary that will continue the narrative. “I am just now starting to feel comfortable enough to have conversations with [my father] that don’t have to do with clowning or the circus, that only have to do with his life outside of work. He gets more interesting as I get to know him more,” Pisoni says. “Once the documentary is over it will be lovely to say, ‘I’ve sorted that out in my life. What else is there?’”