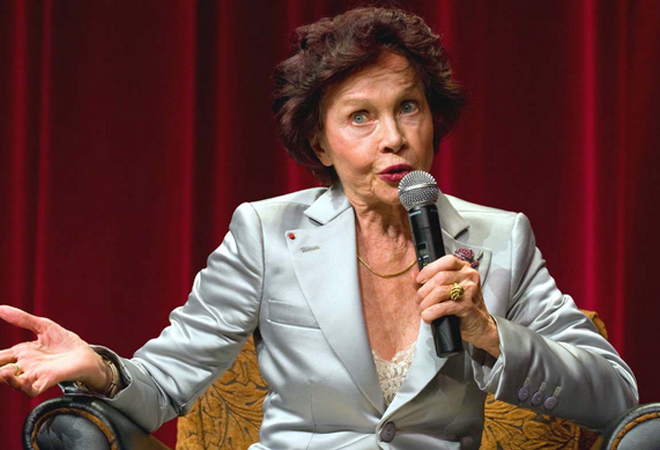 Turn to Turner Classic Movies and soon enough you’ll see An American in Paris or Lili or Gigi.  When you do, you’ll encounter the charm of Leslie Caron. That charm comes to the Laguna Playhouse where she appears in Six Dance Lessons in Six Weeks opening Saturday. Is it really possible that the ingénue who danced with Gene Kelly, Fred Astaire, Mikhail Baryshnikov, and Rudolf Nureyev is taking dance classes?

“It is the ideal role for a woman of my age with my experience and my background,” she says enthusiastically. “It looks like it was written for me. A bit of dancing, a past in dancing and a really very moving description of what happens to a woman alone when she ages. This is the revenge of the old lady who explodes and lives her life like a 20-year-old with the young man she’s hired. We both have this background to fight against, he being an aging gay chorus dancer and me being a widow from a husband who was very restrictive.”

The role of Lily Harrison was played by Uta Hagen at the Geffen Playhouse in 2001 and Caron, 82, is keenly aware of the challenges she faces. “I’ve been studying for several months,” she says. “Of course at my age it’s harder to remember. The memory is not as supple as it used to be. Neither are the legs or arms or back; the whole body is not as supple. Memory is definitely more difficult, but you have to keep at it. It’s a muscle like the rest.”

That muscle works just fine when asked about the first years of her career. The film project that got away was Limelight. “I am angry at Chaplin for not taking me in the part with a dancer. He took Claire Bloom who is a great friend. But I think I would have done it better.” Did she really cut her hair one day before shooting began on An American in Paris? “Yes I did. They brought me out in front of Dore Schary, Arthur Freed, Vincent Minnelli, Gene Kelly. I really thought I was in front of the firing squad. I just didn’t give a damn. I knew I was right.”

But it was the restrictions of being an MGM star that finally took a toll. “MGM was very cautious,” she recalls. “You did wonders in one part and they wanted to reproduce that until the world crumbled. They could not see it to change something that was doing well. When I was stuck in Hollywood I felt I was going to stay frozen in infancy. I had to go back to Europe for my sanity. I’ve got to learn and love and have children and have a normal life.”

In 2010 she played Madame Armfeldt in a Paris production of Stephen Sondheim’s A Little Night Music. Caron can’t bear the idea of not working. “And do what?” she asks. “I’m not somebody who knits. I’m not somebody who enjoys things going by the window. I want to be part of the action. I have worked very hard to keep my body in really good shape so I can live a normal life and be part of the artistic life.”

She becomes a bit philosophical when discussing her over 60-year career. “I think very often there’s a sort of movement helping me. For the sake of it I say my guardian angel, which I don’t believe in. But I think the loving thoughts of who was there in your childhood who wished you well, carry you in life and somehow arrange things so you have good luck. I have made a few fat mistakes. I’ve had some real shortcomings. It wasn’t straight sailing. But I was keeping healthy, keeping ready. Somebody has pushed this [play] my way; I’m going to work on it.”