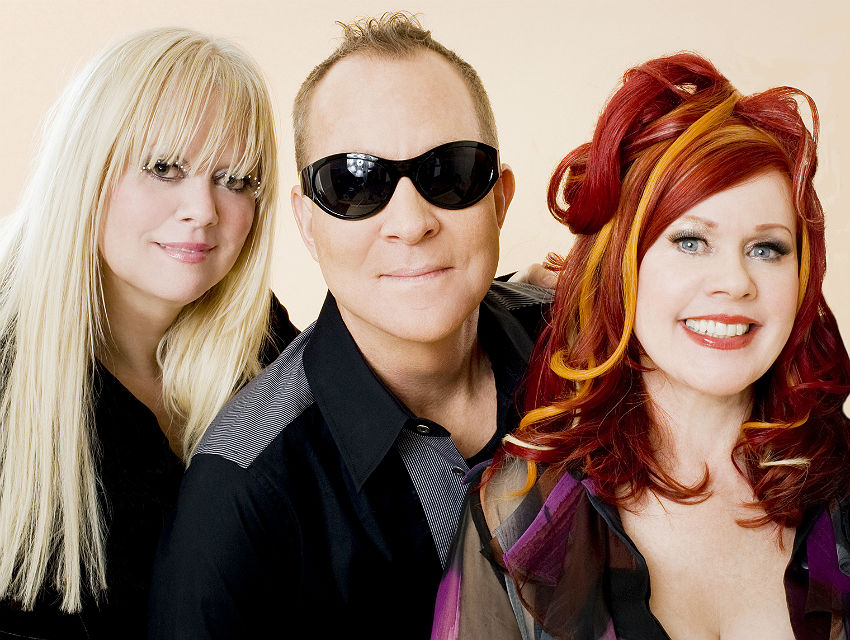 Kate Pierson is truly a shiny happy person—never more than now, as she was able to marry Monica Coleman, her partner of 12 years, this past August. In February, she released her first solo album, Guitars and Microphones. And as a member of the B-52s, she along with bandmates Fred Schneider and Cindy Wilson will be bringing their buoyant and idiosyncratic dance music to the Hollywood Bowl for three nights this weekend with opening act The Psychedelic Furs. Here, Pierson talks about her 38 years as a member of the B-52s, gay rights, and finally going solo.

Congratulations on your wedding!
Thank you. I knew the Supreme Court would rule in favor of legalizing same-sex marriage, but I didn’t even know when we planned the wedding if it would pass by then. But it was great that it happened before the time we set the date.

Given the recent rise of LGBT rights, what role, if any, do you think The B-52s had in moving that needle given the band’s openness about the sexuality of its various members?
I think a lot. We are giving out the message it’s okay to be different, to let your freak flag fly. Love who you are, embrace your individuality, but also embrace other people, too.

There’s a resilience the band has had to rely on during the years—Ricky Wilson died of HIV/AIDS in 1985, Cindy Wilson took time away from the band in 1990, Keith Strickland no longer tours—to what do you attribute the band’s ability to overcome the huge personal and professional hurdles you’ve faced over the years?
The band’s dynamic is like a family. We know each other so well. After all these years you know what buttons not to push. We’ve taken a lot of breaks. It enables us to have a home life, which is important to everyone. We still make each other laugh. We still hang out together and joke with each other. Even after the show we hang out. I think that’s unusual for bands.

Funplex, the band’s most recent CD, was released seven years ago. Are there any plans for new recordings?
Not really. We might do some cartoony things. Maybe we’ll write a one-off song. But there are no plans to do another album. It was very difficult. Keith is in Key West, Fred and I are in New York, and Cindy’s in Atlanta. Never say never.

What are you looking forward to most about your “fireworks finale” shows at the Hollywood Bowl?
The Psychedelic Furs are a particular favorite of mine. I used to listen to them on airplanes. It was calming. It’s going to be a great combination. It’s strange how certain people ask me, ‘Don’t you get tired of Rock Lobster or Love Shack,’ but seeing people and how they react, it doesn’t get old. We can dance in our own unique way and have fun watching the audience, too. I love fireworks, but you can’t see the fireworks from the stage. Maybe I’ll have to jump into the audience and body surf to see them.

Is that something you’ve ever done?
No, no (laughs). And I won’t!

Your solo album came out earlier this year. You started a solo album once before but it never got released. Why this album now?
Namely, if not now, when? I hate the term bucket list, but this was something I had to do. It was really my wife, Monica, who helped me get it out. She suggested to Sia, ‘Can you help Kate get this project done and realize it?’ We went out to L.A. and went on writing sessions with Sia and different people she had written with before. Every time we got a great song and demo done in a day or a couple days. When she started working with Beyoncé and Madonna, I started writing enough material that I could put together another album. Some of it is very danceable. Some of it is more listenable.

Could the young girl you were, who was once part of a group called The Sun Doughnuts in high school, ever imagine the life and career you’ve had?
It’s been thrilling—a really amazing life. I guess if I had the crystal ball then, I would have thought, ‘She waited so long to do this record?’ There were times when I got off track. I always knew I wanted to be a musician, a singer, since I was little. I wasn’t sure if I would make my living doing this. Nobody formed the band formally. Another hand of fate. I think it was just meant to happen.