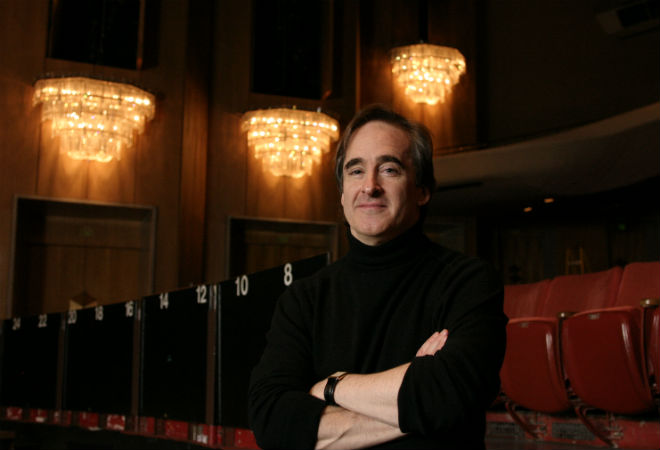 Maybe you’ve noticed that LA Opera seems to have a thing for Benjamin Britten. The company performed The Turn of the Screw in 2011, Albert Herring in 2012, and next spring we’ll have a chance to see Billy Budd. Why the Britten invasion? This year marks the centenary of the British composer, who rose to international prominence when his opera Peter Grimes debuted in 1945. No one is happier about it than conductor James Conlon, who is spearheading a celebration of the composer’s that’s happening all over town.

“Britten entered my consciousness as a young person, the same time as I was learning about Verdi and Mozart and Bach,” he says in his office the day after returning from conducting Britten’s A Midsummer Night’s Dream at the Metropolitan Opera in New York. “People say, ‘Why do you like Britten so much? Why do you think he’s such a great composer?’ I’m not in love with his music because he writes in code or because he’s a pacifist or because he deals with the subjects of male relationships, which no one else does. I’m in love with the music—and was in the beginning.”

Anchoring this month’s events are two performances of the War Requiem. The first happens on Sunday, November 24th at Segerstrom Concert Hall in Costa Mesa and the second occurs a night later at the Walt Disney Concert Hall.

“I first conducted the War Requiem in 1979. It was only 17 years old. I think it already stands alongside [requiems by] Verdi, Mozart, Brahms, Faure,” Conlon says. In it, Britten combines the Latin Mass with anti-war poetry by Wilfred Owen. Conlon explains the odd coupling: “I think that there is some irony in his choice of the Latin Mass. There’s some social commentary. What I think Britten comes back to is authorities have let us down. Governments have let us down. The churches have not been worthy of the subjects they are charged with protecting.”

Conlon’s passion for Britten has only grown with time. “I’m constantly amazed in doing these pieces that so much is revealed. I love the extraordinary intelligence and architecture. He had a practical mastery of every instrument. If you actually can play it and execute it correctly, 90% of the communication and subtext behind it is already done. He knew in his head what something was going to sound like. His use of orchestration is fantastic. Britten, as far as I’m concerned, had his voice from the beginning.”

It’s a busy time for Conlon. He still has to prepare for performances of Verdi’s Falstaff at LA Opera and The Magic Flute, which opens this weekend. But the Britten celebration gives him an opportunity to give back by working with student orchestras from USC Thorton and The Colburn School, among others. “I always learn a lot from students. I love working with young people. It works two ways.  I also think it is important that those of us who are living their lives in the professional setting spend a certain portion of our life passing on what we know to kids and universities. Because I feel so strongly about Benjamin Britten, here’s a good opportunity to reveal a composer who might not ordinarily get revealed to them. By the way, Benjamin Britten would have done the same thing himself. That’s what The Young Person’s Guide to the Orchestra is all about. I think this is the spirit of Britten.”