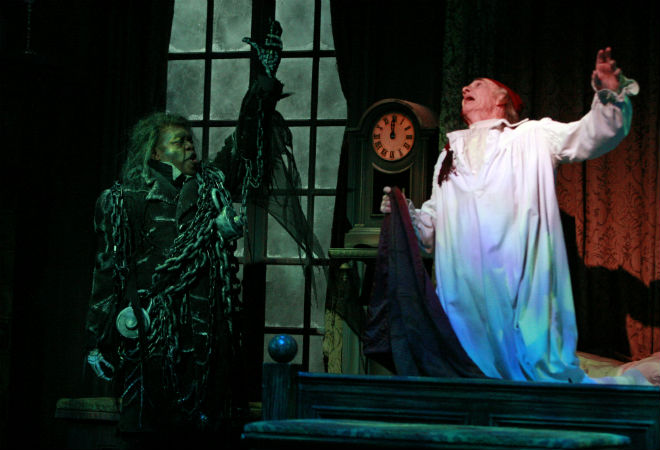 No matter how many characters they play, some actors are inextricably identified with a particular role. With Carol Channing, it was her starring turn as Dolly Levi in Hello, Dolly!, which she gamely performed more than 5,000 times. After appearing on stage in the role more than 4,600 times, Yul Brynner will forever be known as the monarch from The King and I. Hal Landon, Jr. is unlikely to hit those kind of numbers because the role he inhabits, year-in and year-out, is Ebenezer Scrooge in A Christmas Carol.  Appearing once again in South Coast Repertory’s annual holiday adaptation of Charles Dickens’s tale, Landon will, by the end of the season, have played the part of the world’s stingiest boss more than 1,100 times.

Scrooge is a miser who lacks a shred of compassion and certainly doesn’t see the point of Christmas. Only after he’s visited by the spirit of his former business partner Jacob Marley and the Ghosts of Christmas Past, Present, and Future, does Scrooge begin to see the light. “It’s really a great role,” says Landon. “Dickens put a lot of humor into even his grimmest tales. The evolution over the years has been toward unearthing the more serious problems that he was addressing.”

In spite of this being a signature role for Landon, he hadn’t read the novella until he first won the part. “It wasn’t a story my parents read to me as a kid. I was more peripherally aware of it. As for movies? It would have been the Alistair Sim version (1951), but I don’t think I watched that all the way through.”

As the months of the year fly by, Scrooge starts to appear more regularly in Landon’s psyche. “Once October rolls around, he starts popping in my head more frequently,” Landon says. “There were times when I thought, ‘Do I really have to do it?’ I’m past that now. Mostly because when I talk to people who’ve seen it their response is really heartwarming. ‘Christmas doesn’t begin until we see you in A Christmas Carol.’ I like that.”

The role isn’t without complications for Landon. “We’ve had a couple times when I’ve been playing a different part and whoever does the costume design is not familiar with SCR, they will have designed a costume similar to Scrooge.  As long as I don’t look like Scrooge, I can convince them I’m somebody else.” Those “somebody elses” include roles in American Buffalo, Uncle Vanya, The Tempest and Tartuffe.

Next year will mark Landon’s 35th year playing Scrooge. How much longer will he do it? “I don’t know. As long as I’m physically able, I’ll probably keep doing it. While the repetition has been good in terms of my familiarity with the lines, the blocking, and the technical elements, it also allows the mind to wander. What I’m trying to work on being in the now. That’s what my focus has been this year.”