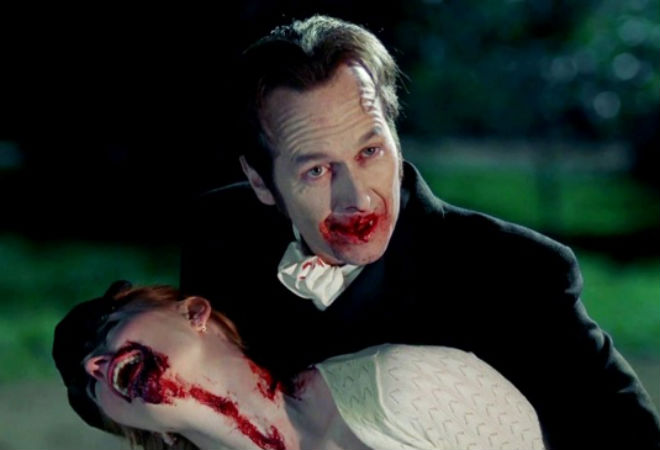 If you only know actor Denis O’Hare from his roles as Russell Edgington, the Vampire King of Mississippi on True Blood, or Spalding in this season’s American Horror Story, then you’ve only skimmed the surface of his career. The Tony-Award winning actor (2003’s Take Me Out) can now add playwright to his credits with his one-man show An Iliad, which opens tonight at the Broad Stage in Santa Monica.

Co-writer Lisa Peterson reached out to O’Hare about adapting The Iliad during the first Iraq War in 2003. “Lisa was looking for war plays. Where was theater’s response to a two-year war in Afghanistan and a new war in Iraq? It hadn’t happened yet. She came across The Iliad and wanted to work with a single actor,” O’Hare recently explained. “She thought of me because I was an activist. During Take Me Out, I was printing out anti-war stickers and I put them everywhere. I’d go out of the house with 10 to 20 sheets of them. I was so furious about the war. Lisa thought, ‘This is a good fit.’”

Homer’s epic poem, set during the Trojan War, centers around disputes between the warrior Achilles and King Agamemnon. The process of shaping the work into a play was a lengthy one. “In the beginning we just got together and talked about The Iliad, the war [in Iraq] and people’s reaction to war,” said O’Hare. “We stumbled on a method of improvising on-camera and transcribing that for the text. What is the story we can tell? We spent a lot of time arguing about the gods. Should we include them? What characters do we cut? That honing process took years, partly because we weren’t doing it full time.”

To help shape the play, O’Hare and Peterson took opposing views of war. “My thesis is war is waste. War almost never achieves anything lasting. There’s always one exception, Hitler. Great, that’s one war. Lisa took the position that violence is a part of human nature. We let these two ideas battle it out.”

Of all the attributes of The Iliad, it is Homer’s empathy that most inspired O’Hare. “He has a way of looking at humanity that is really sympathetic. Homer gives each person value when they get killed. Think about The Walking Dead, what’s the body count there? Do you ever get to know anybody? Here’s Homer who in the course of the book kills over a hundred people. Every person gets a small biographical detail. Lisa and I tried to honor that when we could.”

The play is purposely named An Iliad instead of The Iliad. O’Hare explains, “That book is too big to have just one theme. It is too massive to draw one conclusion or reaction. In terms of humility, we are only focusing on a few themes and therefore cannot call it The Iliad but just An Iliad.”

If he thinks The Iliad is too big with too many themes, his next project will be even more daunting. Called The Good Book it is about the Bible. “The reason I want to do it is I’m an ex-Catholic atheist and am obsessed with religion. As an openly gay atheist man, I feel the bible has been used as a weapon against me.  I want to understand where it comes from. The history is crazy:  the archeology, sociology, linguistics, literary criticism. It’s a rigorous endeavor.”

Does being a playwright mean a change in career direction for O’Hare? “I’ve written since I was 12. I wrote poetry while I was a major at Northwest University. I’ve written three to four screenplays. I was happy to be busy being an actor. Now I get to satisfy a different sort of creative itch.”