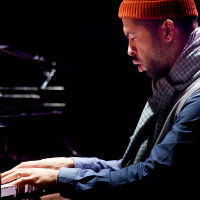 When you think of L.A.’s iconic radio concerts, KROQ’s Weenie Roast and KIIS-FM’s Wango Tango probably come to mind. But Long Beach-based jazz station KKJZ (88.1 FM) also hosts an annual concert. This weekend singers Steve Tyrell and Jane Monheit will perform at the Walt Disney Concert Hall along with musician and radio host David Benoit at the second annual KJazz Summer Benefit Concert. Jazz pianist Jason Moran, who was named the Downbeat Magazine Jazz Artist of the Year in 2011, will open the show. His album Ten was also named Jazz Album of the Year.

39-year-old Moran is an innovator pianist who blends the familiar with the new. He released his first album, 1999’s Soundtrack to Human Motion. Rolling Stone said he was “shaping up to be the most provocative thinker in current jazz.” In 2010 he was named a MacArthur Fellow. More recently he paired with saxophonist Charles Lloyd on the 2013 album Hagar’s Song.

Moran, who grew up in Houston, credits a local radio station for informing his sound. “I grew up with KTSU and that station gave me so much info about the pantheon of black sounds: reggae, gospel, blues, soul, hip hop, and mostly they played jazz. That was a major part of how I understood music.”

“The great jazz radio stations have a duty to continue to evolving their format just as audiences asks the musicians to evolve,” says Moran. “How do you do that with a form of music that has 100 years of recorded history? How do you also keep it contemporary so you don’t isolate your listeners? These are major questions. I want stations like KJZZ to really consider that the music has a lot of power, that we cannot quantify what that power is at it goes into people’s ears,” he says.

Moran often plays with the Bandwagon, a trio rounded out by bassist Tarus Mateen and drummer Nasheet Waits. But for this concert he’s playing solo. “The way I do solo is I travel with a minidisc with all these sounds. I also play with those sounds: pre-recorded conversations or someone else’s song I appropriate. I like to move that way so as not to feel isolated with my piano. I’m not confined.”

As for determining a set list, Moran tries to tailor each performance to the space he’s performing in. “What I really try to do is figure out where I am in the context of the city, the venue, the history of the venue, and the people around me. Who is the audience? What is the relationship to creative music in that city? L.A. has an amazing amount of history and the black arts movement. That’s a lot to think about when I put together a set list.”

Moran and Jane Monheit, who’s headlining the KJZZ concert, attended the Manhattan School of Music at the same time. “She was doing great work and she got great opportunities with the big bands,” Moran recalls. “Me on the other hand, I got one opportunity to be in the third big band. In the piano break instead of playing notes on the keys; I decided to stand up and pluck the strings for this four-bar break. I was no longer in the big band. I didn’t know how I was going to look at music from that point forward.”

Moran’s first new album in four years, All Rise, will be released on September 16. It comes out of the Fats Waller Dance Party he originally performed as part of the Harlem Jazz Shrines Festival in 2011. The show features an open dance floor and the music is a hybrid of jazz, Motown, house, and hip-hop. (He’ll also perform the show at this fall’s Monterey Jazz Festival.) Moran says some Fats Waller is definitely part of his plans for Walt Disney Concert Hall.

So what’s the role of jazz in 2014? “I don’t know what its future is. What I try to do is promote the legacy of creative thinkers and individuals and use abstraction to complete those goals. America used to be proud of abstraction and we have fallen away from it. The future depends on people trying to promote that abstract thinking. Not just in relation to music and jazz and the arts, but the economy, social strife, tension between people. Music, many times, around the world, serves to help us understand other people without having to talk. That’s what this music is built on. Total tension, total release through rhythm, through code. It’s not just an aesthetic. It’s a feeling. It’s a culture. If we talk about it from that point of view, the future is bright.”