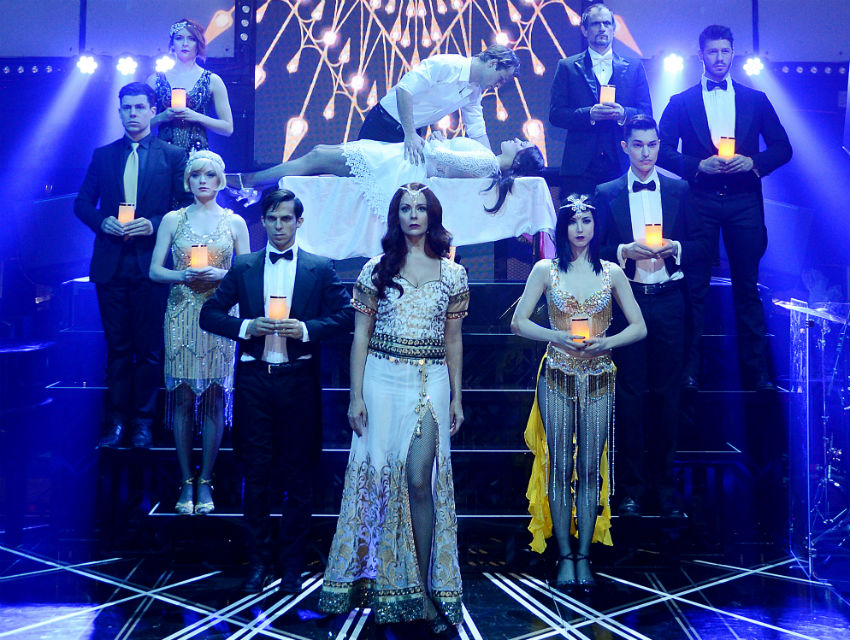 It all started with a basic idea: friends singing songs from Tarantino movies. That idea blossomed into a fully produced show titled For The Record: Tarantino. The series began its life at Vermont Restaurant, which has since become Rockwell Table and Stage. From there it moved to DBA in West Hollywood (a venue that is now closed). Now, in a revised version, For the Record: Baz (as in Luhrmann) is being performed at Light Nightclub at Mandalay Bay Hotel in Las Vegas.

Scott Zeiger, President and Managing Director of Cirque Theatrical, explains how their partnership began. “About thirteen months ago I was in Montreal for a corporate meeting for my newly established job at Cirque,” he says. “I had just started in early March and For the Record: Tarantino was going to be playing in Montreal. I went and loved it. I brought all of the top dogs from Cirque parent to see it. While all of them liked it, they were afraid for Cirque to get involved with this brand because the content of [Tarantino’s] films is pretty violent and deals with subject matter that might not be on the same wavelength with Cirque du Soleil’s more spiritual, love-oriented, happier themes.”

Undeterred, Zeiger made a trip to Los Angeles to see For the Record: Baz Luhrmann (Moulin Rouge, Romeo+Juliet and The Great Gatsby). “I instantly fell in love with it,” he reveals. “All the themes perfectly lined up with what Cirque stood for. I brought all the Cirque execs to see the show in L.A. and all said, ‘this show works for us. We would be happy to produce it in the club we own in Las Vegas as counter-programming to the late-night club action.’”

That club is Light at Mandalay Bay, a club known for EDM music three to four nights a week. “I had a conversation with the folks at Baz about doing a 95-minute version going up at eight and being cleared out in time for the club to open,” says Zeiger. “In order for the truncated version to work, the creators, Shane Sheel, Anderson Davis, and company, chose to eliminate the Strictly Ballroom storyline. It’s not so much that Las Vegas has limited attention span. I think that people are there 72 hours and they have the 15 things they want to do. Once you get much past the 90-minute line, people are ready to go to the next thing on their check list.”

Amongst the things that appealed to Zeiger was the immersive nature of the show. “There’s no model for it in Las Vegas. I think people have to be reminded you are in a club. It’s okay. Get up. Turn around. Sit on the back of the chair. We want people to feel loser. The choreography at times is a bit manic through the aisles, not on the stage. When they are doing a group run through the upper tier, I think they remind the audience, ‘we’re all around you and we’re working for your dollar here.’ I hope as time goes by the ushers and cocktail waitresses and repeat customers will help initiate the newbies just like they did at DBA.”

As for Cirque Theatrical, the only other announced project is collaboration with NBC on The Wiz. “I’m producing the Broadway version. I decided to do this with a partnership with NBC. Why not combine forces and collectively hire the same creative team for both stage and television and work on all the various issues with The Wiz. What I’m doing is helping come up with ideas to add some theatrical magic to some key moments. Someone will certainly fly during the tornado and that somebody is probably Dorothy. Flying monkeys? Yes. The Emerald City? Yes. All wonderful ideas that are percolating with our team.”

While work on The Wiz continues and other projects are in various stages of development, Zeiger is hoping For the Record: Baz has a healthy run in Vegas. “The plan is for it to run and run. Someday would it be nice to do what they do in California and run in rotation with other projects? Sure. We are competing for ticket dollars in a market with giant spectacle–including spectacle created by our own company. No one is going to say ‘Am I going to see KA or Baz?’ If you want to have a couple glasses of champagne and a show to follow with all these star-crossed lovers, you can have a great time. You can have a great time not following the lovers. The creators are really smart. They know how to pull your emotional heart strings even when you aren’t looking.”