Home Theater Curtain Call: Harmony On Stage and Off is Key for Choir Boy... 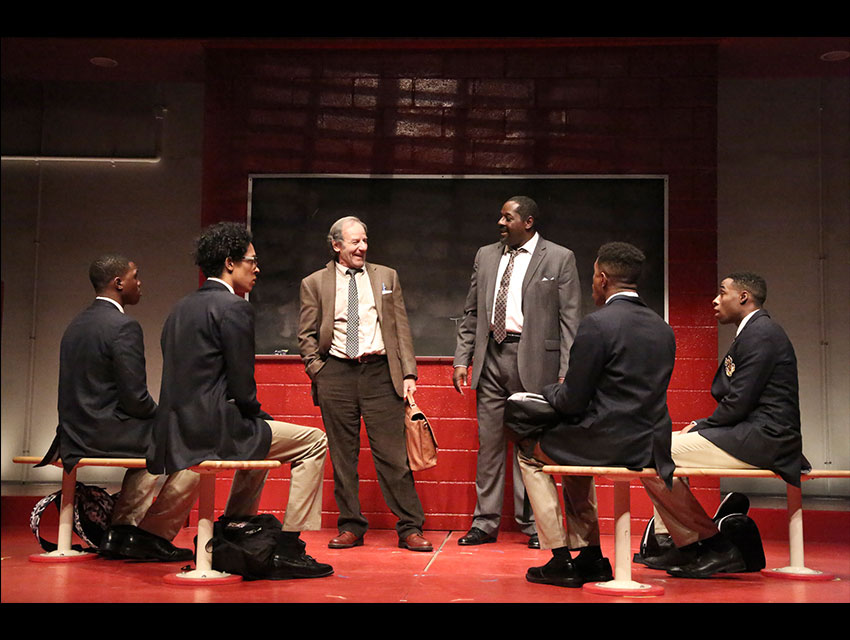 Most plays don’t require actors to sing pitch-perfect harmonies in addition to bringing dramatic life and comedic flair to the script. Tarell Alvin McCraney’s Choir Boy, in its final weeks at the Geffen Playhouse, demands that and more from lead actor Jeremy Pope.

Set at Charles R. Drew Prep School for Boys, junior Pharus Young (Pope) is singing the school song at senior graduation. In the midst of performing, he abruptly stops after being taunted by two off-stage classmates, nearly jeopardizing his chance to lead the choir during his senior year. The headmaster (Michael A. Shepperd) gives him another chance, and over the course of the play we discover who harassed Pharus and how his being gay causes tension for others in the small five-person ensemble.

Jeremy Pope auditioned for the role of Pharus when the play premiered in London. He didn’t get the part but was hired for the lead in its 2013 production at New York City Center. He reprises that role here.

“I think at least for me, I’m still learning about Pharus,” says Pope. “I knew that he was effeminate. I knew he had funny lines and all of those things on the surface, but I needed him to be grounded and have an objective. At the root is a boy who wants to be loved and respected. He’s working his ass off. He’s talented. His view is ‘my orientation isn’t my person. Respect me for who I am.’ At such a young age, to be so young and navigate all those things.”

During the play we hear intimations about current and past troubles in some of the boys’ lives. Rather than spell them out, McCraney uses that as the foundation for the actors to build their characters. Pope says that offered real opportunities to the cast. “That’s what I love about the piece. We rehearsed what’s not written in the play. We created these backstories about these boys. Tarell gave us the freedom to create the before and after, and I think that reads pretty well on stage.”

Throughout the play the cast performs new arrangements of traditional spirituals. “We hit music rehearsals first before we got into the script. That was the hardest part of rehearsals,” Pope offers. “It is strict harmony, you have to know the part. You can’t lean on someone else or you’ll mess it up. We can’t blame someone else. Someone’s voice is not doing the right thing. We know that when the song comes [together] we’re already connected. When the lines and scenes come together, the beauty just happens.”

Choir Boy marked Pope’s first job out of college. Was he nervous that his big break was playing an effeminate gay character? “I think my biggest concern was the nudity,” he says with a laugh. “You’re always nervous about your first gig and that I’m now stereotyped as a black male who can play a gay character. That was a thought for five minutes. I was worried about being naked on stage because that’s the most vulnerable you can be.”

In a recent interview with The Hollywood Reporter, Pope said, “This town has a one-dimensional image of gay men. What makes Choir Boy different? I felt like Tarellmanaged to write this non-one-dimensional image of a gay kid and the audience gets to see him first for his talent and his intelligence. They see him singing. This boy can really sing. He has moments of sass. He has quick comebacks and he’s flip with the lip and in the gay community that is very common. The shade. All of these things the community has that we use. It’s not just Pharus being shady, shutting things down. He’s working to be respected for his talent and his intelligence.”

Since Pope is a young actor looking to make his way, I asked what Pharus has taught him. “I have to think about,” he says. “This was my first show out of school and I kept feeling like I have to prove something to the New York audience and the L.A. audience. As an actor I made this very much an ensemble piece. It isn’t just about Pharus. It’s about all the other boys. I was able to lean in on that and tell the truth as an actor.”

My LA to Z: Beau Mirchoff

For Playwright Will Eno, Writing Thom Pain (Based on Nothing) Was an Act of Bravery