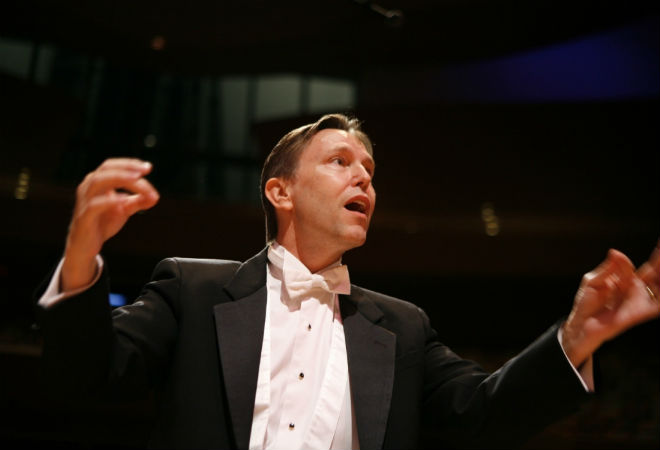 Don’t tell Los Angeles Master Chorale’s music director Grant Gershon that multitasking wastes more time and makes us less creative. He’s too busy to hear about the study released earlier this year by a Stanford University professor that reveals the perils of doing more than one thing at a time. In addition to preparing for Sunday’s start of the Chorale’s fiftieth season, he’s also working with Plácido Domingo on Saturday’s opening of Carmen at LA Opera, where Gershon serves as resident conductor.

“It’s a real good argument for cloning technology, which I do not have access to,” Gershon said during a break from rehearsing the opera. “Thankfully Walt Disney Concert Hall is across the street from the Dorothy Chandler. The key is not getting mixed up and confusing Carmen with “Spem in alium” by Thomas Tallis. If I conduct the “Torreador Song” during Tallis, we’ve got problems.”

Anytime an organization turns fifty, there’s bound to be a celebration, but it isn’t just the number of years that amazes Gershon. “When Lincoln Center was built in New York and the Kennedy Center was built in Washington, D.C., nobody had the foresight to create a professional chorus that would be in residence at those centers. It was only in Los Angeles in 1964 where original music director Roger Wagner had this vision. Here we are fifty years later, the largest professional choral organization in the United States.”

“We decided that half of this season would be looking back at where we’ve been. The second half would be pointing the way forward with new works and commissions.” Among them is one from a composer familiar to Los Angeles. “Esa-Pekka Salonen (former conductor of the Los Angeles Philharmonic) has written a piece at the request of our singers,” Gershon reveals. “It was their idea and they raised the money for this commission. Lo and behold he has a new a cappella piece for LAMC that will close our season.”

LA Opera general director Plácido Domingo, who often appears on stage on opening nights, is conducting Carmen on Saturday and for three subsequent performances with Gershon doing the remaining three. “An opera like Carmen rises and falls on its cast, not only the vocalism but the chemistry of its leads.  We have Ildebrando D’Arcangelo (“Escamillo”) paired with Patricia Bardon (“Carmen”) and they are generating fireworks in the rehearsal room. If they generate half that in performance, the audience will feel the heat.”

In spite of a massive workload and the warm weather in Los Angeles this week, Gershon appears calm and youthful. How does he do it?  He references Oscar Wilde’s The Picture of Dorian Grey, saying, “Don’t go up in my attic and look at the painting.”

Opera Superstar Plácido Domingo Is Under Investigation for Misconduct