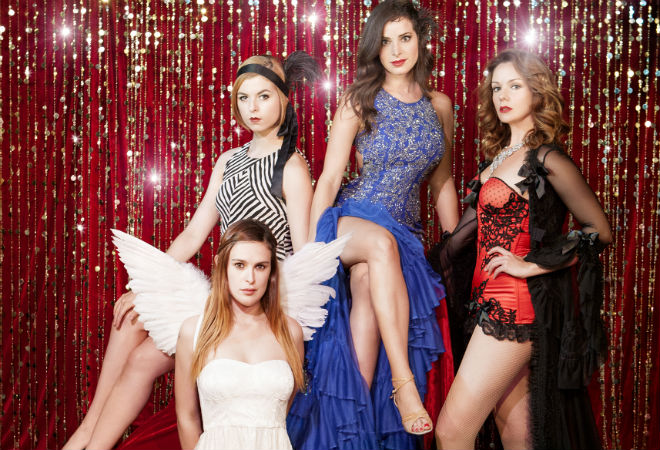 The idea started simply enough, with a group of friends singing songs from movies they loved. Then one day Tracie Thoms, an actress who had appeared in Quentin Tarantino’s film Death Proof, showed up and added a little dialogue. With that For the Record was born. The concept has been so successful, the weekly movie/musical mashup is now going into its third year at Rockwell Table and Stage. For their latest production, For the Record co-creators Shane Scheel and Christopher Lloyd Bratten have completely revamped one of their earlier shows, a celebration of Baz Luhrmann’s movies from early pictures like Strictly Ballroom and Romeo & Juliet to splashy, big-budget affairs like Moulin Rouge! and The Great Gatsby.

Unlike the earlier iteration, which was linear, the new production mixes and matches the four stories with overlapping scenes and music. “The last time we did Baz we sat at the bar and said ‘We have to do it differently,’” says Scheel. “We didn’t want to do the same show in a bigger space.” Last year, Rockwell tore out the wall that separated its cramped bar from its dining room. The newly unified Los Feliz venue gave the For the Record troupe a bigger stage—literally and metaphorically. Bratten, who also serves as music director, says, “What we did was go from condensing entire movies into small sections into experimenting with interweaving the movies.”

Scheel credits director Anderson Davis for shaping the show. “We start with a solid script and an outline of how we get from A to B. This show is a tribute to Anderson’s careful direction and storytelling.

Then there’s the challenge of selecting which songs stay and which ones go. “If we took out ‘Elephant Love Medley’ from Moulin Rouge! there would be  backlash,” says Scheel. “There were moments we couldn’t get rid of or our audience would feel cheated.” All of the films being love stories didn’t help. “Each movie has its love song,” Bratten says. “Whereas we’d only have one [in previous shows,] Moulin Rouge! has ten. I had to work to make it sound different.”

What challenges does the new format present for the cast (which includes Rumer Willis, daughter of Bruce Willis and Demi Moore)? “While specific elements may have gotten easier, overall things have gotten harder. We keep increasing the demands,” Bratten says. “Not only are you singing, dancing and acting at the top of your lungs for two hours straight, you are going through an obstacle course with people eating, drinking, and staring at you.”

Future productions will focus on the work of Tim Burton, Woody Allen, and Cameron Crowe. “We started out as a celebration of music in films,” Scheel says. “We didn’t have an inkling of what this would become. We approach each show with its own identity in mind and continue to explore what we’ve learned from other shows.”