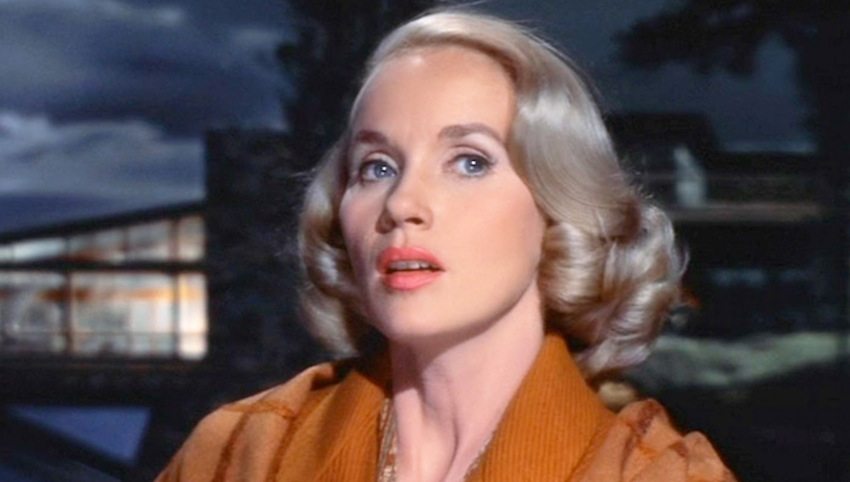 In the 1959 thriller North by Northwest, Cary Grant plays Roger Thornhill, an ad exec who ends up on the run from a criminal syndicate (and the law) after he’s mistaken for another man. Pursued by a ruthless spy (James Mason) Thornhill meets beautiful Eve Kendall (Eva Marie Saint), who offers to help him. Little does he know that she’s in league with Mason. Thanks to a thrilling conclusion set at Mount Rushmore, North by Northwest remains one of Alfred Hitchcock’s most recognizable films, and it’s almost as famous for its score as it is for its imagery. On Sunday, August 31, the 90-year old Saint will host The Big Picture: Hitchcock!, a celebration of Hitchcock’s sonic legacy at the Hollywood Bowl.

“We know people like to be frightened or scared in movies,” says the actress, who won an Academy-Award in 1955 for On the Waterfront. “There’s something about being scared by Hitch. It isn’t when, he always said. That’s not the scary part. It’s what leads up to the scary part.”

For Hitchcock, music played a crucial role in enhancing a movie’s tension, and he called on composer Bernard Herrmann time and time again. “When people think of a Hitchcock movie, it isn’t just the visual, it’s the sound,” Saint says. “I hear the theme from Psycho every time I take a shower. I lock the door. Janet Leigh said she never took a shower again; she’d take baths.”

This isn’t the first time Saint has hosted such an evening. “I had a terrific time doing this at Symphony Hall with the San Francisco Symphony. I sat on the stage with the musicians about 10 feet from the conductor. There was a clock and then he starts with the themes to match up with the scene,” she says.

As for what she’ll say as she introduces music from such films as Vertigo, Psycho, Spellbound, and North by Northwest, Saint says, “I talk a little about some of my experiences with Hitch, but people are going to be disappointed because my stories are so nice. I can hear the groans now, ‘Oh, Isabel, she liked him. She really liked him.’”

North by Northwest is one of Saint’s personal favorites. She still has a telegram she received from Grant and Hitchcock when the two legends were shooting the famous crop-dusting scene. “[They] sent a telegram from Bakersfield saying ‘Glad you’re not here.’ It was so brown that the little telegram was yellow. It seems like another world.”

In October she and her husband, producer/director Jeffrey Hayden, will celebrate their 63rd wedding anniversary. When asked what others can learn from their relationship, Saint isn’t sure how to answer. So she calls out to her husband. “My husband said ‘Patience, humor, and we’re all God’s children.’ I don’t know what that means,” she says, letting out a big laugh. “I am very patient. I take pride in being patient with my husband, my children, my grandchildren. I was patient about my career. I really did feel that if I worked hard, if I were out there every day making the rounds, something good would happen.”

Saint continues to work and appeared this year in Akiva Goldsman’s film Winter’s Tale. But she’ll always be best known for her work with Hitchcock and Elia Kazan. In an interview earlier this year with NPR, she said that when she watches her old movies “It’s almost another person on the screen.” I asked her what the 30-year-old who appeared in Kazan’s On the Waterfront would think of who she has become over the last 60 years. “I think she’d be very proud. She was very fortunate. She met this wonderful man and they have this wonderful family and she is still with that wonderful man. I think the young girl would say ‘She worked hard. She kept her heart open for love in her life.’ And I think she’d be very happy for me because I’m very happy for me.”