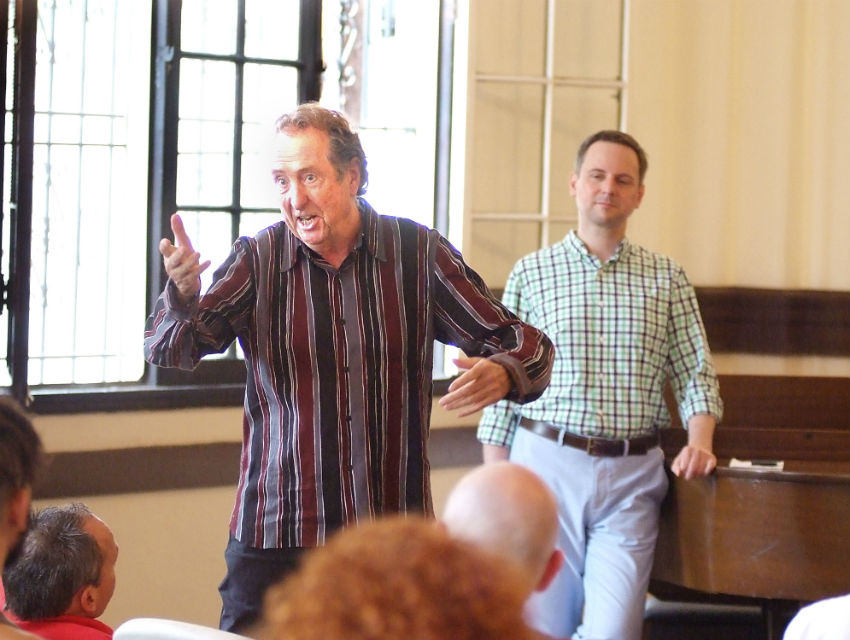 “It’s been extraordinary,” he says during rehearsals for the show. “Holy Grail was our first film. We made another film previously, but this was the first film where we were in charge. The two Terrys were directing. It was hard to find the money. And it was only $400,000. That’s what the film cost. We spent that on lawyers for Spamalot.”

Idle thinks the film still casts a spell on audiences in much the same way as a certain film by the Fab Four. “We were young, we were naïve and we were making things up,” he offers. “We were just trying to be funny. I always think of it a bit like A Hard Day’s Night. Young people with enthusiasm not quite sure what they were doing. It’s a very silly film.”

Along with collaborator John Du Prez, Idle turned his “silly film” into a Broadway musical called Monty Python’s Spamalot. The show opened on Broadway in 2005 and ran for over 1500 performances. It also won the Tony Award for Best Musical. “The nice thing about the play, when I read it, it’s a series of short sketches. ‘Well, I’m not dead yet,’ that’s clearly a song,” he says with a laugh. “The hardest thing to adapt was because we played 98 different characters. How to put it on stage? I collected all the parts played by John Cleese and made that one person. All the parts played by me and made that one person. That was the way to be able to do it.”

For these three performances, Idle will be essaying the role of the Historian. But it isn’t his first time in the show. “I actually once popped on stage in Chicago when we were doing the tryouts, because my plane was stuck by snow and I was really angry,” he reveals. “So I said to Christian [Borle], ‘let me go on stage for you during act 2.’ So I went on stage as him and I thought they wouldn’t notice. Of course they went crazy.”

Idle is not just the historian for the play, he’s the historian for Python. Does the cast come to him for guidance? “They all come a little bit,” he says. “They say, ‘just let me know.’ They know I’m watching. Today Jesse [Tyler Ferguson] was doing a part I did, the guard, and he made it his own. And he asked if it was okay. I said, ‘Absolutely, you’ve got make it your own. Otherwise it’s not funny. You have to inhabit it. You have to be in it.’”

Although he’s a pescetarian, Idle had no qualms celebrating canned meat. “I always say, it’s not for eating, it’s just for comedy,” followed by another robust laugh. “But of course, when we grew up in the 1950s with rationing, Spam was what America shipped abroad. Tins of Spam to starving people in Europe. There were recipes for Spam: how to make Spam fritters, how to make Spam in a basket, Spam wings.”

If the Bowl sells out all three nights, Spamalot will be seen by as many people as would have seen 35 sold-out shows in New York. Does that intimidate Idle? “I love the Bowl. It’s fun. Because people have their bottle of wine and they have their dinner and they are in a very good mood. There’s an excitement in the bowl before the curtain goes up.”

With all the concurrent anniversaries, Idle ponders why people rally around this work. He recalls the first cast of Spamalot. “They bonded. It’s been true of any company around the world, they bond. I don’t know if it is Python or it’s silly or whatever it is, they always have a great time. The comedy musical is king. I don’t want to see people with plates on their faces and Andrew Lloyd Webber. Good luck and nice music. I think ‘make ‘em laugh’ is the secret to comedy musicals.”