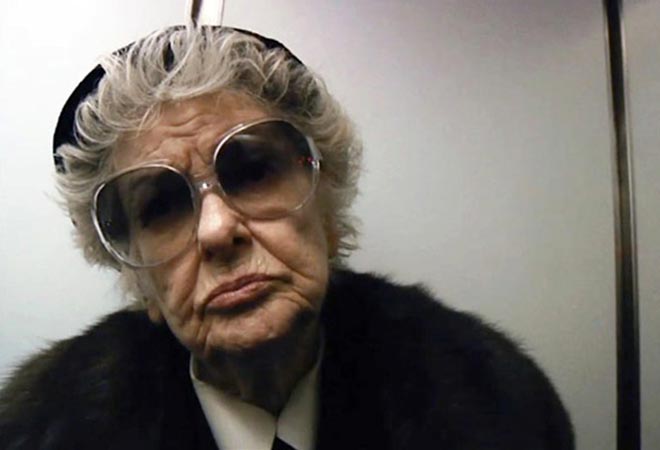 When I spoke to Elaine Stritch earlier this year about the documentary Elaine Stritch: Shoot Me, it was a week after her 89th birthday, and the quintessential Broadway baby was taking a metaphysical approach to the question of age. “We had a discussion the other day: When you’re 89 are you really 89 or 90? Because when you come out of the womb, you are already a year old. I think I’m now 90.”

Regardless of her age, when Stritch made hear earthly debut (in 1925 in Detroit, Michigan) the world would never be the same. Nor would Broadway. Her career included a slew of spectacular roles in shows like Pal Joey, On Your Toes, Bus Stop, Sail Away, Company, Show Boat, A Delicate Balance, and the Tony Award-winning Elaine Stritch At Liberty (which played the Ahmanson Theatre in April 2003). She understudied for Ethel Merman, was adored by Noël Coward, inspired Steven Sondheim, and upstaged Alec Baldwin. Stritch last appeared in Los Angeles in 2012 in Singin’ Sondheim, One Song at a Time at Disney Hall.

After living in New York for decades, Stritch had recently moved to Michigan, where she passed away today, reportedly of natural causes. I asked her if she missed performing. “I don’t know ‘til I do it again,” she said. “I really mean that, darling.”

Stritch was the poster child for resilience, her battles with alcoholism and diabetes well documented. Though she will be forever known for introducing “The Ladies Who Lunch” from Company, it’s as if Sondheim’s “I’m Still Here” from Follies was written for her. Later in life it became her anthem.

“I’m kind of proud of myself because I’ve had a lot of physical problems, and I’m going to have a serious operation the 24th of February,” she told me. “I’m going to go in there and put one foot in front of the other and do the right thing. And I’m not going to hurt anybody.”

Though she had made entrances in some of the most difficult parts ever written, it was clear that Stritch no longer feared the final curtain. “I still don’t know where I’m going,” she said. “But wherever I’m going, I’m okay with it. I’ve made entrances and I’m okay. I’m going into the unknown knowing.”

One entrance she never got to make was as Mama Rose in Gypsy. “I wanted to do that part more than anything else in the world. One day I have this crazy feeling I will,” she said. The closest she ever got was doing “Rose’s Turn” in her Singin’ Sondheim show.

At the end of our conversation she said, “Listen to me, if you ever get to Detroit—and I hope you do and I hope you don’t, I’m sure you know what I mean—give me a call. We’ll go to a chic hotel. I’ll take you to lunch. No, dinner. I like dinner better. Then you can let me sleep all day.”

I never did make it to Detroit and Stritch didn’t get to play Mama Rose, but I hope that somewhere in heaven she’s belting out “Some People” from Gypsy right now:

“Some people sit on their butts;
got the dream, yeah, but not the guts.
That’s living for some people,
For some hum-drum people I suppose.
Well, they can stay and rot!
But not Rose!”

Gilbert Gottfried Has Died from Heart Disease at 67