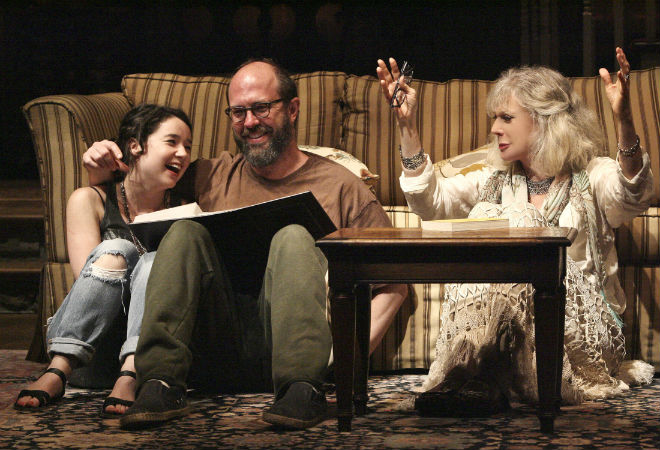 Most playwrights will tell you that opening a play in New York City, particularly on Broadway, is one of the most terrifying things in the world. This year’s Tony Award-winning musical, A Gentleman’s Guide to Love and Murder, worked out the kinks at the Old Globe in San Diego before opening in the Big Apple. Pulitzer Prize-winning playwright Donald Margulies (Dinner with Friends) also appreciates having a chance to fine-tune new work in advance of a New York run. That’s exactly what he’s doing with his new play The Country House, which opens tonight at the Geffen Playhouse.

“I’m anxious about the idea of plunking a new play down on Broadway without having seen it and really having a chance to work on it,” Margulies says before a rehearsal of the show. “Having a preliminary production of Time Stands Still [at the Geffen] was truly invaluable. It gives me a chance to play it in front of an intelligent audience and an appreciative audience. It gives me an opportunity to take a little more time and a little less stress, though it is stressful, by having the opportunity to see it mounted.”

The Country House tells the story of an extended theater family that comes together for the first time since the death of matriarch Anna Paterson’s (Blythe Danner) daughter Kathy. “Initially I thought I might do an adaptation. I think that was the result of my being hesitant about opening a brand new play in New York,” Margulies says. “I thought I might do a Chekhov or Strindberg or Ibsen. Then I decided to extrapolate themes and archetypes from Chekhov and do my own version of that kind of play, a pastoral comedy, which is what this is.”

“I had wanted to do a backstage comedy. I wanted to contribute to that theater tradition. And I wanted to write something more comedic. My plays are funny but they are pretty heavy. This play is also funny and very dramatic.”

When asked if there were any plays of that genre that inspired him, Margulies says, “I’m thinking of The Seagull, The Royal Family, those are the first two that popped into my head. Stoppard’s The Real Thing… there’s something very enjoyable about exploring the possibilities of writing about theater people.”

But it took more than the milieu for Margulies to find the core of The Country House. “When I realized the play was about grief and people’s different ways of dealing with it, that’s really when I figured it out,” he says. “The play is dedicated to my friend Dana Reeve. [Actress and wife of Christopher Reeve.]  She just haunted me while I was writing it. What I’m saying without sounding mystical is that Dana’s spirit for me became Kathy. She became this missing person. Dana has really helped me and made it a very specific lost person.”

As with Time Stands Still and several of Margulies’ other plays, The Country House is directed by his longtime collaborator Daniel Sullivan. “I can’t really explain it,” the playwright says. “It is sort of like love. I trust him completely. If something is bothering him, there’s usually a good reason. I’ve learned a lot from him. My time with him has made me a stronger writer.”

The Country House is scheduled to open on October 2nd in New York at the Manhattan Theatre Club. How many revisions does Margulies anticipate between the closing of the Los Angeles show and its New York opening? “As the days begin to fly by, you make peace with what you can accomplish right now. We’ll have the benefit of going into rehearsal with our Broadway production and half of these cast members are coming with us. I’ll be able to have a little more time to do more tweaking. Some sharpening. I think it’s coming into focus.”