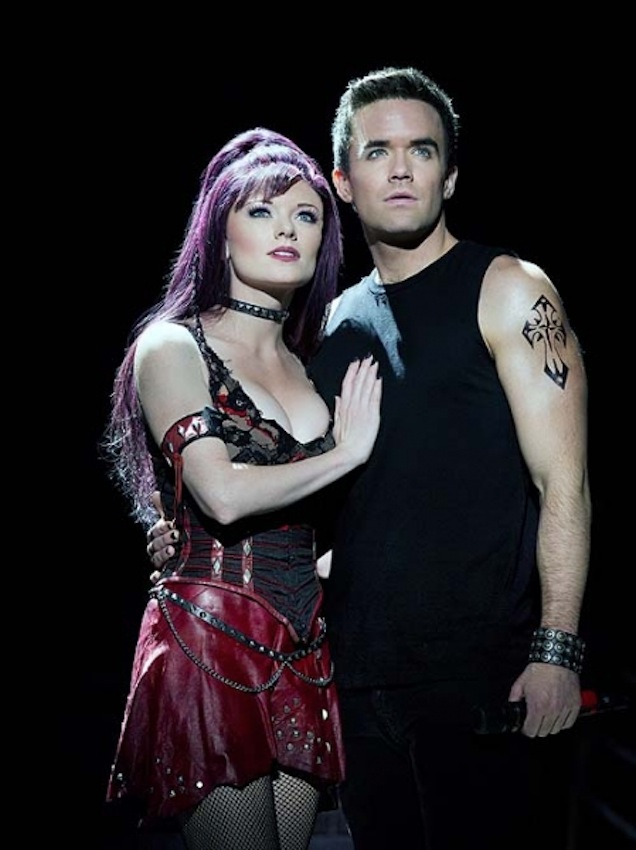 When Queen’s lead singer Freddie Mercury died of AIDS in 1991, he probably couldn’t have predicted the pervasive influence of his music. Nor could he imagine that the songs “Radio Gaga,” “Fat Bottom Girls,” and “Somebody to Love” would someday find themselves in a musical. After a 12-year run in England, We Will Rock You will conclude its year-long U.S. tour at the Ahmanson Theatre this month.

Making sense of the story in the musical isn’t really possible. Nor does it matter. At its best, We Will Rock You is a celebration of Mercury’s legacy and the music he made with bandmates Brian May, John Deacon, and Roger Taylor. The task of giving this show life falls on the shoulders of its two leads, Brian Justin Crum (Galileo) and Ruby Lewis (Scaramouche).

“Freddie Mercury has been an inspiration for my whole life,” says Crum. “Listening to him sing has always moved me. I’ve always wanted to sing like him.”

Lewis says her experience performing in this show has intensified her more passionate feelings about Mercury. “I feel like I’ve gotten a window into who he was. Freddie was one in a million. He just shared everything he had in his heart and he touched so many people. It gets me emotional.”

Unlike Crum and Lewis, Mercury never had to perform in concert eight times a week. “The last 35 minutes of the show it feels like it’s all out there,” Crum says. “I sing ‘We Will Rock You’ right into ‘We Are The Champions’ right into ‘Bohemian Rhapsody.’ What I do for the 21 hours that I’m not here is way more important than the three hours I am here. I sleep. I don’t drink. I don’t smoke. I live like a nun. I go the gym every day. I drink a gallon of water every day.”

“Bohemian Rhapsody,” which isn’t listed in the program, is performed as an encore at the end of the show. After a year of singing the famous (and famously opaque) song, do the show’s leads have any idea what it means? Lewis offers one theory: “I think he was affected a lot by fame and there are some interviews where he’s like ‘Everybody please calm down or you are going to kill me.’”

Crum has another idea. “At the risk of sound like a total hippie, I think that Freddie Mercury was an alien. He was so in-tune with himself and his body. It was almost as if he were predicting his own future. ‘It’s too late/My time has come/Sends shivers down my spine/Body aching all the time.’ Or ‘Goodbye everybody/I’ve got to go.’ It’s just so touching and so emotionally charged.”

When the show concludes its run on August 24, Crum and Lewis will return to the ranks of unemployed actors, but they aren’t going quietly. “Ruby and I are going to do a big closing night party at Fifty Seven,” Crum reveals. “We’re both excited to go all out. This will be a celebration of the last year. [We’ve] talked about doing a couple unplugged Queen songs, maybe something we don’t sing in the show.”

Before they pack up, Lewis will continue to soak up the goodwill that she and the cast receive from the audience. “We receive a whole lot of energy. We can see everyone up to the third balcony. I think people can’t help themselves because the songs mean so much to them. It is amazing that I’m getting paid to sing these songs in front of these people. It affects me every night.”