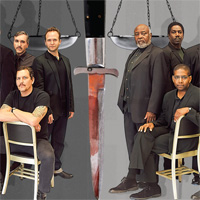 In Reginald Rose’s play Twelve Angry Men, jurors must deliberate the fate of an unseen defendant on trial for murder. In Sheldon Epps’ new production at the Pasadena Playhouse, there’s an equal amount of discussion taking place after the show is over. Which was precisely his goal.

“Certainly the idea of a group of men from vastly different walks of life, different political agendas, upbringings, coming into a room and having to talk and listen and work through issues is a metaphor for what we have to do in America,” he said on the phone the day after the show’s opening. “We are all different. As the men in the jury do, we have to get past our own prejudices about people who can be identified as ‘other’ and evaluate on an honest and heartfelt basis.”

The core of Epps’ vision for the production included making six of the men black and the other six white. The show begins with only one juror considering the innocence of the defendant. One by one, he slowly convinces the others to do the same. “I thought that the tension, underlying or overt, would be an interesting dynamic. I did go back and forth a long time before I cast the play,” Epps says.

What has been motivating much of the post-show conversation is the fact that the six black characters agree on acquittal and it isn’t until the second act that the white characters do the same. “I’m the director and that clean division between black and white made for great drama. It was somewhat inspired by Obama’s speech about being a black man in America. The perceptions that black men in America have to carry around and how they respond, it’s my history. There’s an entirely valid production to be done all over the map. That wasn’t really the intent or conceit of this one.”

Beginning with the second night of previews, audiences have been verbally making their satisfaction known as one-by-one the jurors agree to an acquittal. Epps couldn’t be happier. “People are very connected to the story and invested in the right thing happening. The fact it has become a spectator sport is very surprising. It really does mean that everyone feels like they are in the room and pulling people to the side they want to be on.”

Or is that truly what the reaction suggests? Epps admits that some of the conversation hasn’t always been encouraging. “There’s been some grumbling about this concept from a few people. ‘Aren’t these guys supposed to be white men?’ gets asked, which I think is both surprising and sad from my point of view. It makes it even more important that we’re putting racial issues on the stages and having these kind of conversations.” When told of comments about the black jurors coming in to rescue the white jurors he replies, “If that’s the criticism then thank God because it’s been the other way around for hundreds of years. I say to them, ‘It’s about time.'”