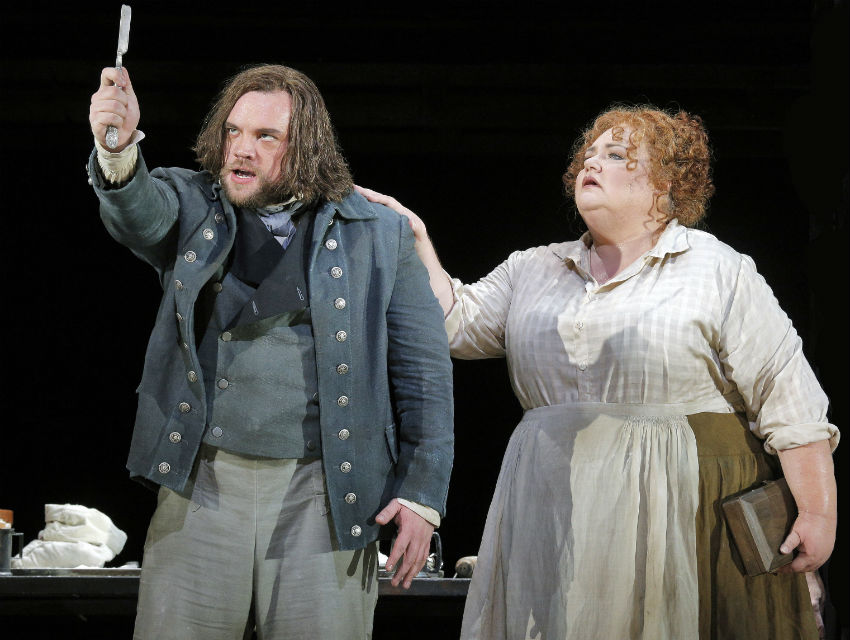 The work of Stephen Sondheim have been very good to Lee Blakeley. Or you can argue that Lee Blakeley has been very good to Sondheim’s work. The director oversaw the French premieres of A Little Night Music, Sunday in the Park with George, and Sweeney Todd for Theatre Du Chatelet, the last of which he’ll revisit as San Francisco Opera presents Sondheim’s tale of the demon barber of Fleet Street, opening September 12.

For those unfamiliar with the macabre masterpiece, Sweeney Todd follows Benjamin Barker, who returns to a Dickensian London after being sent away on trumped up charges. (The judge who sentenced Barker was fond of his wife and ultimately made their young daughter his ward.) Drunk on his need for vengeance, Barker assumes a new identity—Sweeney Todd—and opens a barbershop, planning to exact revenge by slitting the throats of those who did him wrong. Here, Blakeley opens up about bringing his production of the classic back stateside.

How is this production different than the one you staged in Paris?
It’s not different at all really. Theatre Du Chatelet is sort of an opera company as well, even though we used a more mixed artist base. The essential material is the same, and it’s a similar style in which they are singing. We’ve got more people on stage and more people in the chorus.

Is your approach to directing opera different than your approach for theatre?
I direct opera the same as I do a musical. It has to be about the quality of the theatrical story. It has to be about the music. The text is so rich with Sondheim—you have to ensure that that gets across. It’s an epic telling of the story, but within that, it’s my job [to make sure] that you don’t lose the human quality along the way.

The key to Sweeney’s arc in the show pivots on the song Epiphany, in which he just lost the chance to kill Judge Turpin. How important is it to get that moment right?
That’s literally the rehearsal I just left. Epiphany is the turning point. I don’t believe he’s mad until Epiphany; the last vestiges of Benjamin Barker are gone, and Sweeney becomes fully inhabited. If you played him as a psychopath all the way through Act 1, it wouldn’t work.

Sondheim has often expressed a sense of disappointment that his music isn’t taken as seriously as his lyrics. Does Sweeney Todd make an argument for his work as a composer?
Without a shadow of a doubt. To be able to take the Requiem and combine it with loss-based music hall shtick and then take it into sweeping romantic melodies like Johanna—it’s an absolute tour de force. The music is sensational. It’s brilliant narrative music in the way the music of the best opera composers is narrative and informative. The music gives you subtext and emotional context, which is often at counterpoint.

For decades an argument has existed over whether or not Sweeney Todd is an opera. You are staging this in an opera house. What’s your view?
I maintain it’s a musical. You can cast it, and it has a symphonic and lyric quality to it. My mantra throughout the whole thing is no vowels should be worth more than the words you are singing. We have glorious voices, but they can’t be at the expense of the text. It isn’t just about the beauty of the sound; it’s all about the tension. It’s an argument—text versus music—that has gone on for centuries and will. It’s a great piece of theatre. The opera/musical classifications don’t matter.

Having done several of his shows, what inspires you most about Sondheim’s work?
Because he writes both the music and the lyrics, there’s very little separation in terms of the way they tell the story. Every piece has different challenges, and every piece has different forms. The Grand Guignol of Sweeney Todd is different than A Little Night Music, which is different than the storytelling you need to move the story in Into the Woods. As a director it’s not like, ‘I’ve done one Sondheim;’ it’s more like, ‘I’ve climbed that mountain, now let’s try that one over there.’ I’m incredibly privileged to have directed four of his shows on a grand scale in Paris. It’s been a wonderful last five years.