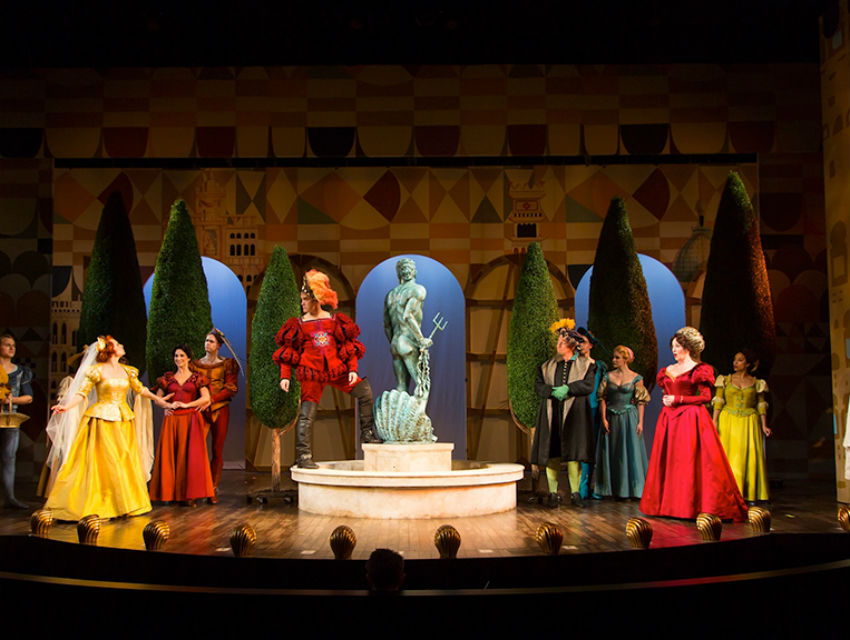 By almost any definition, the last year has been very good to director Darko Tresnjak. He guided A Gentlemen’s Guide to Love & Murder to last year’s Tony Award for Best Musical and in the process earned himself a Tony Award for Best Director of a Musical. Earlier this year he directed the highly-acclaimed LA Opera production of John Corigliano’s The Ghosts of Versailles. As Artistic Director of Hartford Stage in Connecticut, he has carte blanche in putting together each season. So what do you do after such a year? He answered that question by directing a new production of the classic Cole Porter musical Kiss Me, Kate, which opens this week at the Old Globe in San Diego.

“We planned this before Gentlemen’s Guide got all the Tony Awards last year,” he says prior to a rehearsal in San Diego. “It kind of became a bigger deal. We just planned this as a loving co-production between Hartford Stage and the Old Globe. I’ve directed 25 Shakespeare plays and a Tony Award-winning musical and other musicals. This was the right time to combine my love of Shakespeare and musicals.”

Originally produced in 1948, Kiss Me, Kate is an adaptation of Shakespeare’s The Taming of the Shrew. In this show-within-a-show, Lili Vanessi (Anastasia Barzee) and Fred Graham (Mike McGowan) play Petruchio and Katharine on stage. Off-stage, the former couple continues the battle of the sexes. The book is by Bella and Samuel Spewack. The music and lyrics are by Cole Porter and include such classics as “So In Love,” “I Hate Men,” and “Too Darn Hot.”

“What I find refreshing about Cole Porter,” offers Tresnjak, “especially about Kiss Me, Kate, is that there’s something exuberant and unapologetic about the way he writes about men and women. The characters are flawed. They lie and cheat. It’s kind of a wonderful celebration of human sexuality because I think his first subject is sex, not love. We think of it as very sophisticated and they both are, but The Taming of the Shrew and Kiss Me, Kate, some of it is very raunchy.”

Tresnjak points to “Brush Up Your Shakespeare” as an example of that raunchiness. It is a song sung by two hit men trying to collect on a loan. They stumble their way around the theatre and, late in the second act, find themselves suddenly on stage doing this song. “I can’t explain it rationally at all,” he says. “It’s one of those things, it makes no sense, but it just works. Some have been very fond of saying, ‘if it was all rational, we wouldn’t need theater.’ That’s my big statement.”

Cole Porter, according to Patricia Morison, the original star of the show in 1948, had a hard time getting Kiss Me, Kate produced. “I read about the timeline following the crippling horseback riding accident, Porter became much more reclusive,” Tresnjak says. “It’s one of the greatest comeback stories in American theatre, and it was his most successful show. It ran for more performances than Anything Goes. It’s my understanding that the Spewacks had to fight for him. That seems unbelievable to me.”

Upcoming for Tresnjak is a tour for Gentlemen’s Guide (which will play the Ahmanson Theatre in March) and his new season at Hartford Stage, which includes a play based on the novel that inspired Hitchcock’s Rear Window and a new musical adaptation of the animated film, Anastasia. Of course, that isn’t everything.

“I’m talking to John Corigliano about a project in the future,” he reveals. “I loved working with him. In the wake of Gentlemen’s Guide and all of the acclaim, I am getting some offers, particularly in the opera world. I’m completely blessed because the list of Shakespeare plays I’ve done are the ones I wanted to do. The operas I’ve done, many of the ones I’ve done, I wanted to do. So that’s a blessing in my life. Even the toughest days, I never forget how fortunate I am.”