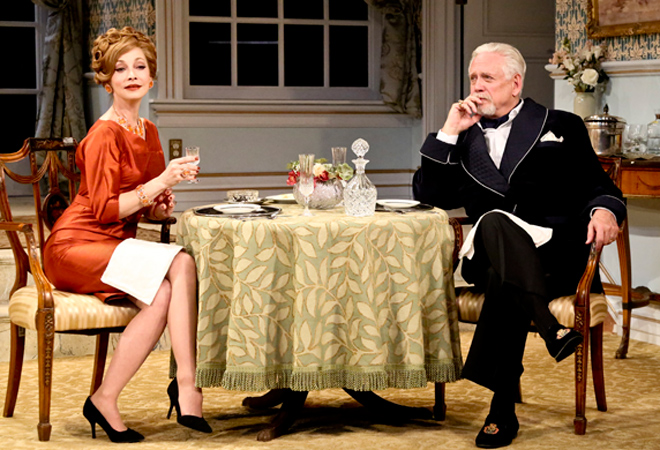 It seems to be Noël Coward season in Los Angeles. Over at the Wallis Annenberg Brief Encounter and Love Noël were playing simultaneously. Last year the Pasadena Playhouse produced Fallen Angels. This year they’re staging one of Coward’s rarely produced later plays, A Song at Twilight. But if you ask Art Manke, the director of both productions at the Pasadena Playhouse, there’s nothing surprising about the spate of Coward productions.

“I don’t think this year is unusual,” he says just a couple days before opening night. “Coward has never gone out of fashion. That’s because his works are universal. They don’t rely on a particular time or place. The truths are as true today as they were in his lifetime.”

A Song at Twilight, which was written and first produced in 1966, starred Coward as Hugo Latymer, a celebrated novelist and playwright (played by Bruce Davison here) who’s visited by his former paramour Carlotta Gray (Sharon Lawrence). She’s working on a book about her life and wants to print some of the letters he sent her. When Latymer declines, she reveals that she has additional letters he sent to a male friend who has passed away.

Manke believes A Song at Twilight remains as topical as ever. “What’s so interesting about this play is it was first written one year before homosexuality was decriminalized in England. I brought up this play [with artistic director Sheldon Epps] because we had just gone through a historic time with the Supreme Court overturning Prop 8 and ending DOMA. Wouldn’t it be interesting to revisit it in America on the heels of that? Sure enough, it still packs a punch.”

Does another play about coming to terms with one’s sexuality, particularly one written more than 45 years ago, seem dated? “I guess you could ask that about any historical evening. The signing of the Declaration of Independence, is that outdated? This play is not just about being in the closet sexually. It’s about not fulfilling your own personal happiness. The lesson is about opening your heart in whatever way you can to maximize your enjoyment of life.”

A Song at Twilight marks the seventh Coward play that Manke has directed. What is it about Coward’s work that resonates with him? “That’s a good question,” he says, pausing a moment before continuing. “What I particularly enjoy about his work is he’s so smart. He’s so clever and witty and I never tire of the humor in his plays along with the insight into human behavior. That’s a pretty tough combination to beat.”

In his bio in the show’s program there’s a Los Angeles Times quote that describes him as him “L.A.’s Coward specialist.” “I did 50 productions of Shakespeare, Moliére, and the other dead white guys,” Manke says. “Then I shifted to new plays and television. Now I’m at the point where I’ve found a balance in doing a new play, a classic, or a musical. Right now my passion lies in working with the best writers whether they are alive or dead in a variety of settings. I guess I’m not really answering the specifics of your question, but I’m fortunate that my passions are diverse in terms of a theatrical diet and I’m lucky enough to taste a lot of them at the buffet of theater.”