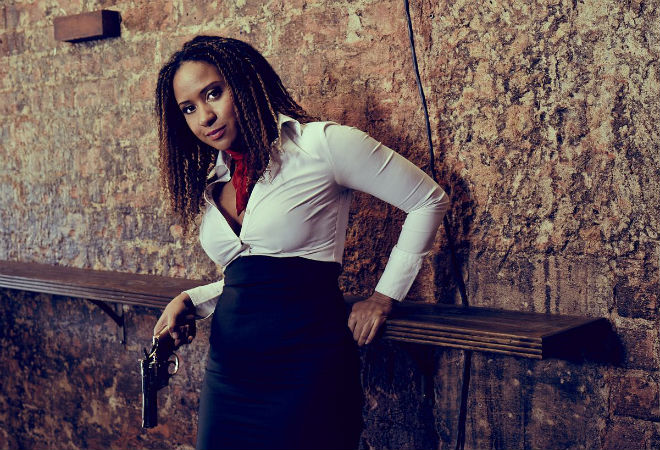 In Woody Allen’s film The Purple Rose of Cairo, the actors onscreen notice that Mia Farrow’s character is repeatedly attending the film. One of them, Jeff Daniels, is so entranced by her that he steps off the screen and into the theater so he can start a romance. It’s a wonderful fantasy, a version of which has come true for Tracie Thoms.

In 2007 Thoms played one of the badass women (does Quentin Tarantino write any other kind?) in Death Proof. Since then, she played Joanne in Rent‘s final weeks on Broadway, the same character she portrayed in the 2005 film version of the musical. More recently, Thoms has been starring in another theater/movie hybrid: bringing the soundtrack and the dialogue from the director’s movies to life in For the Record: Tarantino.

For the Record is something of an L.A. institution, a “micromusical” with a revolving cast of actors and a live band that riffs on the films of celebrated directors like P.T. Anderson and the Coen brothers. The show, previously based at Rockwell in Los Feliz, is now located at DBA in West Hollywood. Neither cabaret nor theater, For the Record is more like a 360-degree concert. For The Record: Tarantino features segments and reenactments from movies like Pulp Fiction, Reservoir Dogs, Django Unchained, and others.

“He has a certain rhythm that he writes in and he looks for people who understand that,” Thoms says of working with Tarantino. “When people come in with that understanding he respects that. Death Proof was a singular audition process because I was extremely proactive with that one. I don’t believe in walking in in character, but for some reason I just started being vulgar and cussing him out. I was possessed. I was joking and making fun of him. He laughed and laughed and laughed.”

Several years later, Thoms was part of the original ensemble that put together the first iteration of For the Record. She explains how the mix of dialogue and music came together: “We were working on these songs of Tarantino when [co-creator] Shane Scheel said ‘Wouldn’t it be cool to add a little dialogue?’ I thought that was a silly idea. Why would you do that? These movies are perfect. It’s weirder for me because was I in one. I was very nervous about trying to recreate that. And I was wrong. I was wrong.”

Any concerns she had were allayed when Tarantino saw that first version, which was staged at Rockwell Table and Stage (then called Barre) in Los Feliz. “He loved them,” she says. “The first time he came, he saw me do the show and we were doing snippets.” While the earlier iterations of For the Record were more like linear performances of songs from the films, this new version is more of a pastiche with songs and dialogue from numerous Tarantino movies mixed and matched for dramatic effect. The filmmaker has already seen this new version—twice. “I didn’t know how he’d feel about the songs being fully weaved together, but he just loved it,” Thoms says. “Every time a scene went from one movie to the next, it was like he was at an amusement park.”

The new structure has intensified the demands on the performers. “I have to step my game up,” Thoms says. “We’ve all studied the movies, but you have to really jump into it. These characters are put together for a reason. If you put Jackie Brown with Jungle Julia, my track, you have to keep the overall arc in mind, which is challenging and makes it interesting.”

Other changes came with the new venue, a nightclub where there’s a larger performance area—and new staging that takes advantage of it. “Everything is bigger and louder and brighter,” Thoms says. “The profile of the whole thing has gone up. It’s become this cool place to be.” Having Tarantino, Bruce Willis, Aaron Paul, and Barbra Streisand show up doesn’t hurt either.

Thoms will appear later this year in the new film version of the Annie. She also has a pilot (co-starring occasional FTR performer Rumer Willis) pending at the E! Network and an episode of Catfish in the works. Ask her which track (aside from her own) she’d like to perform in FTR: Tarantino and she is quick to respond: “The Mia track. I’d like to do some sword fighting. Who doesn’t want to kill Bill?”