Home Theater Curtain Call: Conductor Jeffrey Kahane Offers Up Beethoven With a Side... 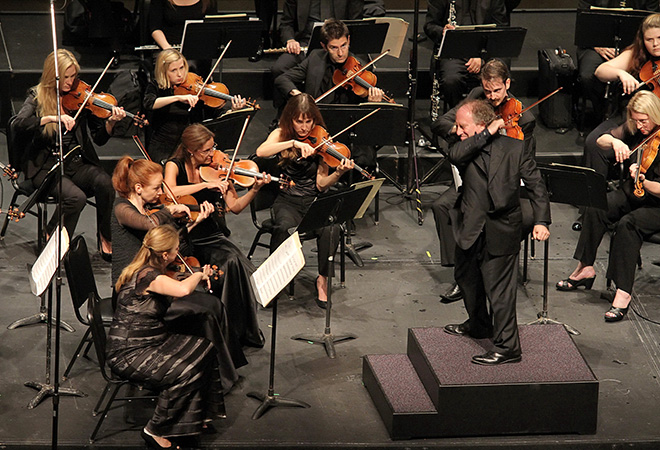 Some pieces of music become so ingrained in our psyches that we don’t consider new interpretations or we overlook what made it so great in the first place. Jeffrey Kahane, music director of the Los Angeles Chamber Orchestra, is making it his mission to shed new light on some of the classical repertoire’s most important pieces of music during the “Discover” concert series. One example is Beethoven’s Symphony No. 3, known as the Eroica. Kahane and LACO will explore the groundbreaking work on Saturday, Feb. 22 at the Ambassador Auditorium in Pasadena.

“It is my intention, my hope, that audiences will come away with a fresh perspective on a piece of music they’ve heard many, many times,” says Kahane. “There are people who’ve heard it 50 to 100 times and some who may have never heard it. The way the evening works, I spend 50 to 60 minutes talking about the piece with the orchestra and a piano and trying to put it in context.” LACO will perform the symphony after the intermission. “As people listen to it they might be able to hear it with fresh ears and have a sense of the philosophical, spiritual, and historical atmosphere in which it was composed. What I’m not going to do is analyze the piece in a technical way.”

Eroica broke new ground on many levels. Kahane explains: “The sheer scope of it dwarfs anything anyone had ever done—in terms of length and emotional content, one might say the spiritual and philosophic content of the piece. It was Beethoven who called it ‘Eroica” and I’m going to talk about the many different interpretations of that. Who is the hero? Was there more than one? What have others thought?”

Kahane has definite ideas about the identity of the hero. “In particular I’m going to focus on the myth of Prometheus, which is deeply connected to this piece.” According to Greek mythology, Prometheus was responsible for molding man from clay, being man’s protector and giving mankind fire. Kahane continues his theory, “The theme of the last movement, it is the only theme he used in four different pieces. It is always important when a composer quotes himself in one piece. Beethoven did it four times. I’ll also talk about how the myth evolved from the ancient Greeks to Beethoven’s contemporaries, who wrote important poems about Prometheus. Goethe, whose work he knew well was one. The other is Percy Bysshe Shelley whose Prometheus Unbound is important. It’s interesting to look at two interpretations of the myth written at the same time as Beethoven’s musical interpretation.”

One his presentation has concluded, the real work begins for Kahane and LACO. “Anytime you are confronted with a masterpiece of this order it’s a humbling and intimidating experience. You have to do the best you can to channel the incredible energy. Maybe the greatest challenge is to inspire the orchestra to rise to the energy that’s in the music. It doesn’t get any more difficult. The Eroica is challenging in terms of sheer endurance.”

Kahane believes Symphony No. 3 along with the rest of Beethoven’s oeuvre will forever be a part of classical music. “It’s incredible to think that many of this man’s works entered the repertoire the day they premiered and have never left it. He is a cosmic genius in a sense. He encompasses the whole world and that’s what he set out to do. Beethoven is referred to as the universal composer. It sounds like a cliché, but I think there’s profound truth in it. It explains why his music, more than others, is so beloved everywhere in the world and why people turn to his music in times of great upheaval, crisis, and epochal change.”