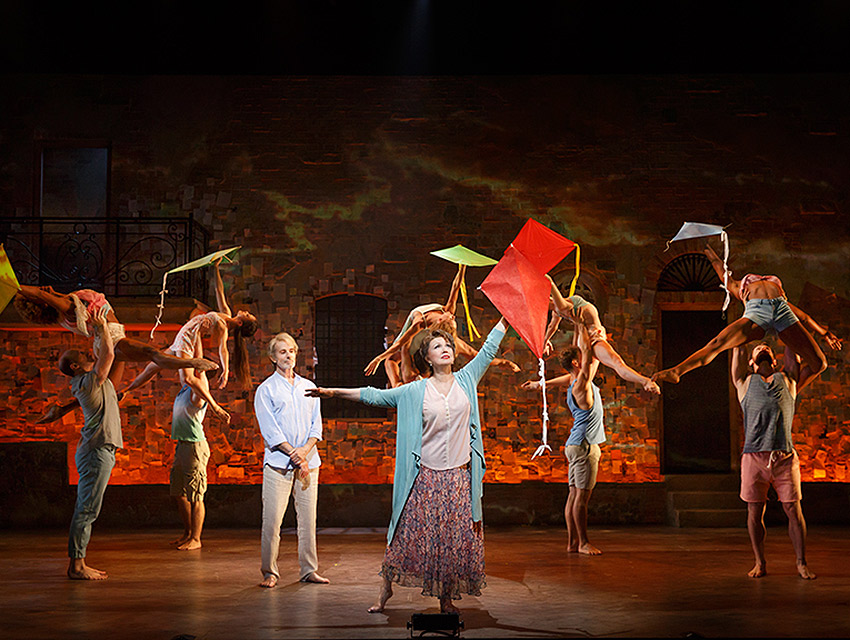 Musicals set in such diverse places as the French Antilles, early 20th century America, the wildly original imagination of Dr. Seuss, live television in the 1950s, and a boxing ring seem to have nothing in common—save composer Stephen Flaherty. Perhaps it’s the versatility Flaherty has already exhibited that made him the right collaborator for director/choreographer Christopher Gattelli (Newsies, The King and I) and his new show In Your Arms. The production makes its official world premiere tomorrow night, September 24, at the Old Globe in San Diego.

For In Your Arms, Gattelli’s asked ten playwrights to write ten wordless stories. Amongst those are Douglas Carter Beane (Xanadu), Terrence McNally (The Full Monty), Christopher Durang (Sister Mary Ignatius Explains It All For You), and Lynn Nottage (Ruined). These stories would be set to music by Flaherty and choreographed by Gattelli. There were no restrictions on time or setting—audacious for a musical. Here Flaherty discusses the challenges presented by In Your Arms, working with Gattelli and the various writers, and how he tackled this highly conceptual show.

How daunting was this project for you?
I shouldn’t admit to this, but it was the biggest creative challenge I’ve ever taken on. I think it was a personal dare because I mostly write vocal music. This would be a completely new way to tell stories without the use of words. These playwrights created these worlds, and I had to get into that world and create the music for what they had created on the page. It will either be so terrific or go into the night. It’s allowed us to be more fearless with this piece.

What was your response when Gattelli first approached you?
I thought it was a wonderful idea for a show. It’s about romantic destiny. And going to ten celebrated playwrights to get their take on the same idea—it seemed like theme and variations of a great idea.

Were any of these pieces more challenging for you than the others?
The one that scared me the most was David Henry Hwang. He had written a piece that opens in a techno nightclub in Shanghai and jumps back in time to the Ming Dynasty. There wasn’t a single reference point in that where I felt comfortable. That terrorized me for a while.

How was this process different for you than writing a traditional book musical?
I didn’t know [Gattelli’s] process. It would start with the author’s words, and we would really talk story and break it down into the dramatic beats. He would talk about visual ideas he would have and how he might tell each section within the story. Then we would talk about emotional content. A lot of it was music first. And then some of it he would bring to various master classes and workshops with dancers. The tricky thing with this show is that everyone is a star in one of the pieces, and they have to support the others in the other pieces. We are flexing new muscles and the dancers are flexing, literally, new muscles. I would watch the movement and get physical ideas based on the movement.

With so many different writers, was there a concern about consistent tone?
None of these writers knew what the others were doing, which I thought was fascinating. The challenge is there are ten very unique voices creating original stories, and then I have to pull the evening together. Some pieces are very dramatic and some are broadly comic. That was one of the challenges: could the really dramatic pieces rub elbows with farce? How would different tones work together in one show? I wrote a motivic musical theme that is rolled into all ten pieces, so there’s a little filament that connects all the pieces. When we saw it at New York Stage & Film, there is a cumulative effect over the evening. It didn’t feel like a review.

Gattelli, who won a Tony Award for Newsies, said he couldn’t wait for people to hear your work. He called it “a real showoff piece. To think one person did this show is mindboggling.” Is it mindboggling to you? Or is it just what you do?
That’s kind. It’s sort of like a Meryl Streep moment where her accent molds from performance to performance, but if she did ten in one show. It was quite virtuosic to get in the center of all these music worlds and to have some sort of shape and build to it. I said to Chris, my goal is that within the opening few seconds of each piece, the audience knows exactly where they are through the music. It was a wonderful challenge.