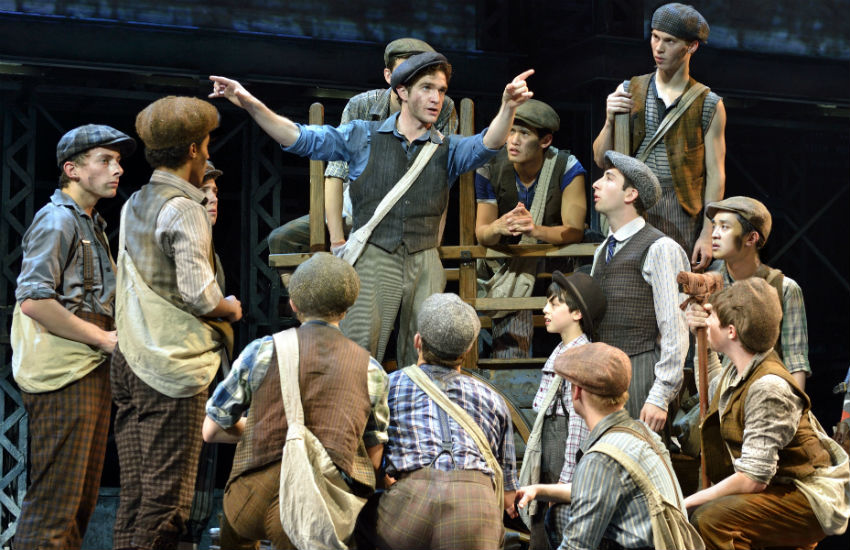 When a film fails it is rarely seen or heard from again. The 1992 Disney film Newsies was by all accounts a flop. But home video turned that flop into a cult favorite. Amongst those who admired the film was choreographer Christopher Gattelli. Years later he never imagined that he would be coming up with Tony Award winning choreography for the stage version of Newsies, which is now running at the Pantages Theatre.

“It influenced me in as much as I was a huge fan of the film when I was the boys’ age in the show,” Gattelli says after a rehearsal in New York. “The median age is 19-20 and I was around that age when it came out. I wanted to retain what made me feel those special feelings about it: the strength of the boys, the athleticism, that really influenced me when I was young and I wanted to take that ball and run with it.”

Newsies is a classic David versus Goliath story. It’s 1899 and Joseph Pulitzer (Steve Blanchard) has decided to increase the price of newspapers. The newspaper boys who distribute the papers, or newsies, bear the brunt of that increase. Lead by Jack Kelly (Dan DeLuca), they rebel against the tycoon to fight for their rights. The songs are by Alan Menken and Jack Feldman who wrote the songs for the film. There is a new book by Harvey Fierstein (Kinky Boots, La Cage Aux Folles.)

The athleticism in the dancing no doubt contributed to Gattelli winning Broadway’s highest award. “Not to give away secrets,” he says, “it’s more of an optical illusion. We have twenty-something boys and there are a lot of moments that rely on just a few of them to carry the load. When you get to spread it out amongst the guys they get to do what they can do. We structured it so that everyone had their moment and their showcase.”

Gattelli’s main concern beyond the choreography is the health of his dancers. “I had to have long talks,” he says. “Great, you can do this, but your physical health comes first. It’s eight times a week and you travel. I’ve been there. I toured when I was 19. We constructed it so everyone is safe and maintains what makes the show exciting.”

For the touring company the creative team reassembled and worked with this company with as much fervor as they did the original. “When we did the show on Broadway, the boys were a big influence on what I did and what we created together. They brought special talents to the table. It was like a painting. I get to use this color and that color. We had a whole new crop of talent to play with. There are things we added based on this phenomenal group of kids. If [audiences] saw Newsies on Broadway and then go to the tour, there are a lot of surprises.”

One surprise for Gattelli was the number of people who auditioned knowing the choreography for the show. “One of our dancers on the tour, DeMarius Copes, saw the show and fell in love with it,” Gattelli says. “He took a picture with [the NY cast] at the Broadway Flea Market in 2013; he was doing the signature jump with our cast. He said ‘I need to be in that show.’ A year later we were rehearsing and he’s part of the tour. It inspired him to work that hard to get a spot in the national tour. It makes me emotional to think that we are giving back in that way.”

I Won the Hamilton Lottery