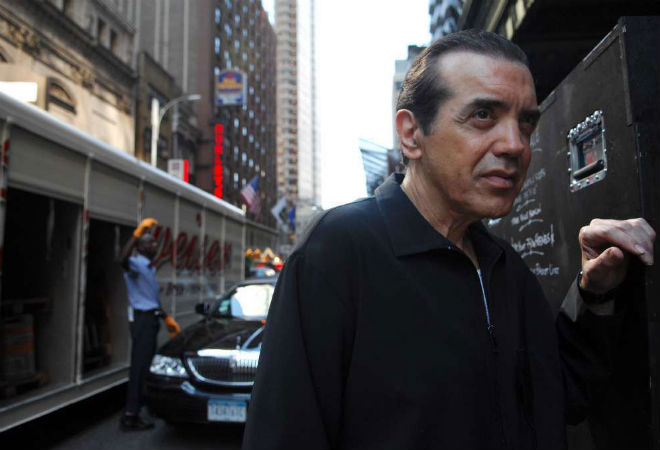 Kenny D’Aquila was smart when he was putting together the debut production of his play Unorganized Crime. He brought in fellow playwright and actor, Chazz Palminteri, to play one of the lead roles and produce the show.  Palminteri’s one-man play A Bronx Tale, which premiered in Los Angeles in 1990, was subsequently made into a feature film by Robert De Niro. Will lightning strike twice.

“After I opened my play, it just took over Hollywood and became a phenomenon,” says Palminteri the morning after Unorganized Crime’s opening night. “I don’t know if this one will be like that. It would be pretty amazing if it did. We just did opening night yesterday and the reaction was incredible.”

In the play, Palminteri plays Sal, the eldest son of a crime family boss. He suddenly appears in Detroit where his brother Gino (D’Aquila) and his girlfriend Rosie (Elizabeth Rodriguez) are living in exile from the family. Sal has arrived to pass along family news and to see if there’s a way to restore Gino’s position in the family.

“What really inspired me about [the play] is that it’s a voice that I haven’t heard,” Palminteri says. “It was walking with these characters doing despicable things, but it was funny. It walked a line between drama and comedy. The thing about Sal, because he’s a sociopath, is you have to play him as real as you can. The more real, the more scary—and funny—he is.”

Beyond this being a good role, Palminteri has another motivation for being involved with Unorganized Crime. “I always wanted to help someone the way De Niro helped me with A Bronx Tale. Here’s this guy who is a terrific actor and a great writer. He quit to raise a family and then he came back into the business. What better play and person to do it for and to pay it forward? [Kenny] had the talent. He wrote a good play. If things work out for him, he promised he’ll do that for someone else.”

There’s a line in A Bronx Tale that serves as Palminteri’s personal mantra. “I think the saddest thing in life is wasted talent,” he says. “It is also a marker for me as an actor and as an artist. A couple of my friends who are stars said ‘Why are you coming to do equity waiver theatre in Los Angeles?’ I’m going to show the world this is a good play. I’m not going to waste what this guy wrote. I’m not going to waste his talent or mine.”

Palminteri is also enjoying his time in Los Angeles. “My favorite restaurant is Craig’s. It’s great food and a great vibe, and Tommy is the ultimate maître d’. It reminds me of old Hollywood. I love walking in Santa Monica. I love how it’s so easy to be healthy here. The quality of life here is so great.”

He also points to another advantage to being in Los Angeles that he hopes will help Unorganized Crime. “Some people in Hollywood read scripts, but they can’t see it. You have to show them. When they sit in the audience and they watch it and hear people laughing and getting emotional, that’s the fastest way to get them. It’s like when I did A Bronx Tale. I would love for the studios to have a little theater and to promote plays where more work can come out of that. I think the quality of the work would be a lot better.”

Beyond waiting for other film parts and perhaps a musical version of A Bronx Tale that Palminteri won’t discuss just yet, he has another play called Human he may perform here. “God has given me this gift,” he says. “There are heart surgeons. I could never do that. Everybody is given a gift and this is mine.”