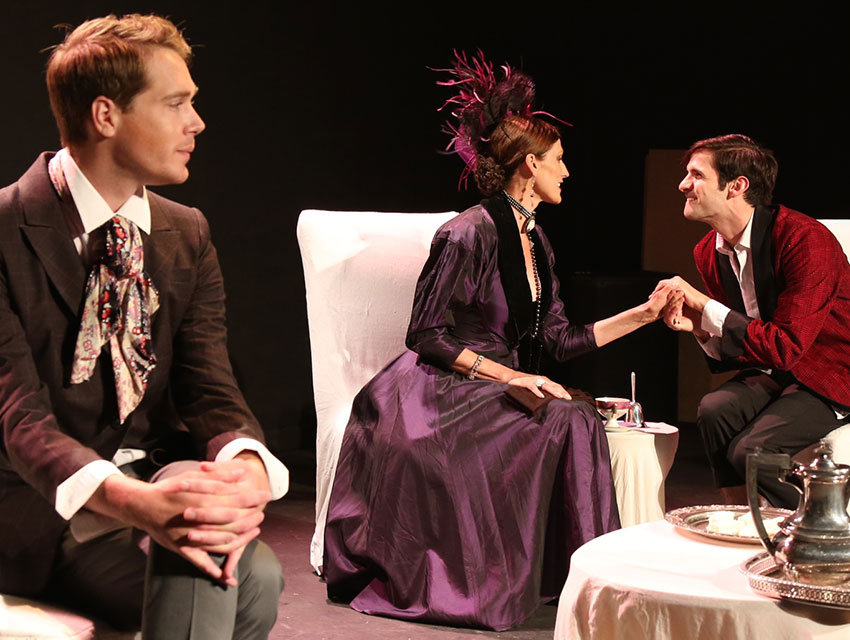 Oscar Wilde never seems to go out of fashion. Al Pacino is working on two films connected to the 19th century Irish writer: an adaptation of his staged reading of Salomé and Wilde Salomé, a documentary about Wilde’s work on the play. Wilde’s most performed play, The Importance of Being Earnest, one of the breakout shows at this summer’s Hollywood Fringe Festival, is reopening for a four-week run at the Lounge Theatres in West Hollywood. This unique interpretation of one of Wilde’s best-known works was created by director Casey Kringlen.

In the original version of Wilde’s labyrinthine farce, subtitled “A Trivial Comedy for Serious People,” Jack Worthing assumes a double-identity. In the country where he looks after heiress Cecily Cardew, he’s a serious young gentleman known as Jack; in the city where he intends to propose to Gwendolen Fairfax, he’s a libertine named Ernest. His best friend Algernon Moncrieff (who’s also Gwendolen’s cousin) falls head over heels for Cecily, but Cecily is hopelessly fixated on marrying someone named Ernest. In the meantime, the orphaned Jack wants to marry Gwendolen but her imposing mother Lady Bracknell refuses to allow the wedding.

Various stagings of The Importance of Being Earnest have featured male actors in the role of Lady Bracknell; Brian Bedford played the part on Broadway in 2011 and David Suchet (recently seen in L.A. in The Last Confession) will be tackling the part in England next year. The twist here isn’t that Lady Bracknell is being played by a woman (Nancy La Scala), it’s that Gwendolen and Cecily are being played by men (Mason McCulley and Grant Jordan). Wilde’s play has also been trimmed from its 2.5-hour length to 90 minutes with no intermission.

Kringlen, who previously directed a gender-bending version of Romeo and Juliet, explains his motivation for reworking the play. “As much as I don’t want to be a gay or queer creator,” he says, “I wanted my work to have my sexuality in it. It had to be a feature of the art I was creating. There was a filter on me as an actor where I had to be passable as straight to be cast. That mental fuck over on me made me realize my true calling was directing.”

It was while serving as assistant director on another production of Earnest that Kringlen was inspired to rework the play. “I decided I wanted to do a gay version of The Importance of Being Earnest because that’s the way we talk. This is the world I know. And you can extrapolate to Hollywood and Los Angeles the tea scene, which sounds like anyone that is really focused on style and presentation and putting a version of themselves that isn’t who they are out there.” He’s referring to a scene where Cecily and Gwendolen meet and realize they are both engaged to Ernest Worthing. The men try to clear up the situation, but instead they alienate the women.

Kringlen workshopped the play several times before reaching the version audiences will see. “My first thought was playing with drag,” he says. “I performed the tea scene in drag with a friend of mine. Then we did it with just gay men. I finally decided we’re doing gay men and there’s no drag. I know there’s been a drag version and a gender swap, but I don’t know if there’s been this simple little gay version.”

What is Kringlen’s ultimate goal with this production? “I don’t think we’ve changed Earnest much,” he says. “We cut out scenes that didn’t directly deal with plot and our lead characters. I do feel a little protective about the LGBT community. I like that Earnest doesn’t deal with the oppressive issue of people. There’s something exciting about celebrating a world of possibility where oppression of sexual orientation is just gone.”

Kringlen thinks Wilde would be pleased with his adaptation. “I think he’d love it,” he says. “It’s so sad, yet poignant, that a lot of his troubles started around the opening of this show. His life got a little crazy. I’d like to think that he’d finally rolled over to the appropriate direction of his grave. He’s resting happy now.”