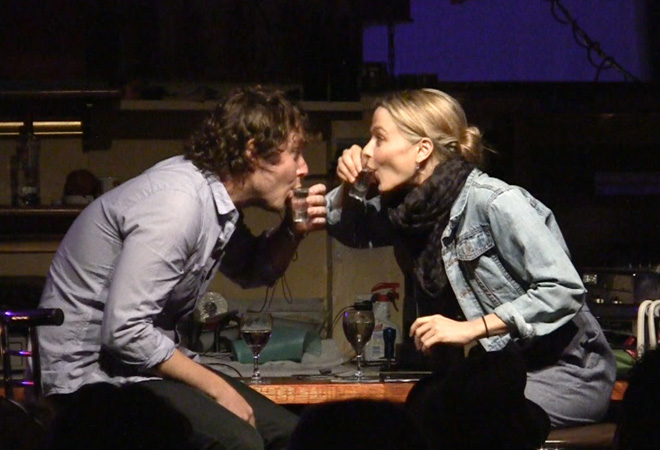 Blind date: When paired, these are two of the most terrifying words in the English language, fraught with danger and filled with the possibility of meeting your soulmate. They’re also perfect fodder for theater. That’s where you’ll find Serbian-Australian actress Bojana Novakovic (Edge of Darkness and the upcoming Fox series Rake) acting out that scenario on Wednesday nights at Hollywood bar The Three Clubs in The Blind Date Project. There are a couple of twists: The show is improvised and just like her character Anna, Bojana doesn’t know who her date will be for each performance.

“I cannot tell you how terrifying the show is every night,” she says over coffee at Dupar’s. “There is no script. I don’t know who the person is going to be. Even if they are amazing in the first ten minutes, the show could go to shit in the next ten or twenty. It is absolutely the most terrifying thing I’ve ever done on stage and the most enthralling.”

The Blind Date Project sprang from Novakovic’s involvement in a play in Australia. She was nervous about returning to live theater after some time away. “I hadn’t been on stage for two years. I had to perform in this show and sing and talk to the audience. I almost had this panic attack. I said to a friend, ‘Do you want to do a show with me?’ I don’t have time to learn more lines, so it has to be improvised. And it had to have songs so we set it in a karaoke bar. What are two people doing? Let’s be on a date.” The light bulb moment occurred when Novakovic asked her friend, “Would you be terribly opposed it if was a different date every night and it wasn’t just you?”

“We created the format over four weeks. We decided that we would fail. This is going to be terrible.” Instead, critics came, word spread quickly, and “We never had to advertise at all because the show sold out on the concept alone.”

Novakovic only finds out who her date will be is when he or she walks through the door. Nor does she know the backstory given to each co-star by her director Tanya Goldberg, who offers direction to each actor during the show vis-à-vis text messages and an occasional phone call. “There have been no dates that have been the same. They’ve all been unique. I’ve had men suck my feet. I’ve been crawling across the bar. I’ve slapped guys. I’ve had dates that are so beautiful and simple and soft. There have been times when the audience responds verbally, ‘Get out while you can.’”

What prompts such wild variations from both co-stars and audiences? “The form reflects what we are exploring, which is seeking love, the fear of facing the unknown, not knowing what’s going to happen, and allowing things to happen as they do, which is terrifying. When it’s improvised you see awkward moments that are really organic. It’s not gags. It’s not joke-based. It’s based in long-form, patient life circumstances and cringe-worthy comedy. People love that. They love watching train wrecks as long as they aren’t on them.”