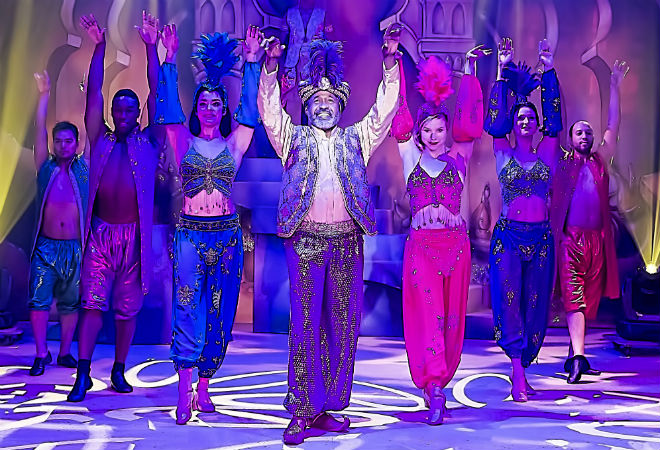 Actor, singer, and dancer Ben Vereen has been performing on stage, in movies, and on television for over 45 years. He is best known for his Tony Award-winning turn as the “Leading Player” in the original production of Pippin and for his role as “’Chicken’ George Moore” in Roots. It seems like he’s done it all, but with his latest role as the Genie in Aladdin and His Winter Wish at the Pasadena Playhouse he can finally add panto to his repertoire.

While panto can be defined several ways, this production falls squarely in the tradition of the English Christmastime spectacle known for characters who sing, dance and tell jokes. “I’ve never done panto before,” Vereen said during a recent conversation. “What’s so wonderful about it is the kids that come to see it. I love to see the faces and the excitement. There hasn’t been one show that hasn’t been over the moon for the kids. It’s a gas.”

Panto allows the audience to hoot, holler, and sing along while the cast gets to do some improv. “I do my bit. The thing about panto is that if you do too much, the show could stretch out for five hours,” Vereen says. “I try to keep it condensed.” As for his performance on the Travie McCoy/Bruno Mars track “Billionaire,” he says, “The rapping is a whole new thing. I’m just getting into the groove of that.”

Finding his groove has sometimes been challenging for a man who has experienced remarkable highs and lows, both personally and professionally. In 1987, his daughter Naja was killed in a traffic accident. Less than five years later, Vereen was critically injured when a car driven by music producer David Foster hit him. Despite these tragedies, he remains inspired. “I can’t explain it. I know there’s something inside of me that says ‘Get up.’ Whatever has gone on the outside, there’s something inside that has compelled me to go on. Angels guide me. You get up, one foot in front of the other. You gotta show up for the blessings to happen. You have to be present in the now. If they can’t see you, then they pass you over.”

That spirit infuses his performance in Aladdin and he couldn’t be happier doing a Christmas show. “If we an keep the idea of Christmas every day of the year, we’d be better off. Giving. Caring. Loving. It’s in your heart. You are the Christmas you seek.”

Before ending our conversation, Vereen mentioned Bob Fosse, who directed him in Pippin and All That Jazz. “He was a wonder. He was a good friend,” Vereen says. “People ask me to describe him and I say look at the scene [in All That Jazz] with Joe Gideon and the angel where Gideon says ‘When I see a rose, that’s perfect. I mean that’s perfect. Why the hell can’t I do that?’ That was Bob in a nutshell. He was a tenacious worker towards perfection. He was a cat.”

As for the future, Vereen is open to suggestions but has a few ideas of his own. “Bring it on. Bring it on. I’d like to do Shakespeare, Moliere, August Wilson. There are a lot of plays I’d like to do as the universe opens them up to me. I’m a working actor and that’s a blessing.”