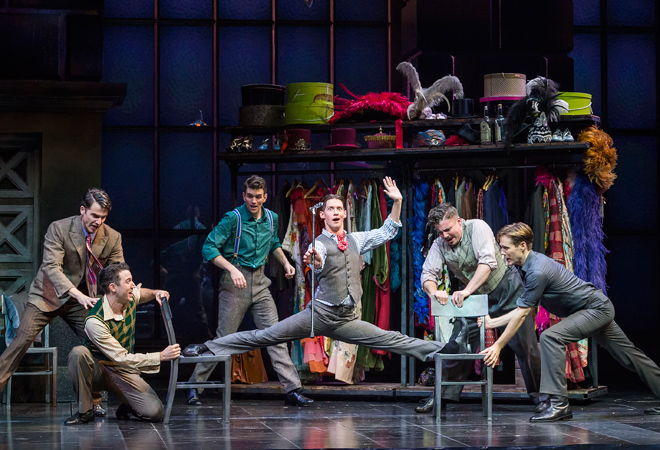 Barry Manilow and Bruce Sussman have been working together for nearly 42 years. They have written more than 100 songs together including “Copacabana” and “I Made It Through the Rain.” In 1997 the La Jolla Playhouse premiered the musical Harmony with tunes by Manilow and book and lyrics by Sussman. Tonight the show opens at the Ahmanson Theatre for what is billed as Harmony – a New Musical. It’s new? 17 years later?

“Bruce and I have had every road bump you could possibly have,” Manilow says. “It was never about the show. It was about producers and business and it was just terrible.” Sussman agrees: “When you sign with a commercial producer, they get a multi-year option. Normally three years. A lot of the years were eaten up by the failure of commercial producers to get the job done.”

Through it all their faith in Harmony was rock solid. “We never stopped believing in this show,” Manilow says. “After a while it got so crazy and frustrating Bruce and I put the show in the drawer, but it wouldn’t leave us alone. It’s like it was saying ‘Don’t forget me.'”

Harmony tells the story of the Comedian Harmonists, an all-male vocal sextet that formed in 1927 in Berlin. They were known not only for their singing but for the way they incorporated physical comedy into their performances. “Nobody remembers them. In Germany they are still The Beatles. It was a mission of ours to introduce them to the public and say that these guys were the first guys to do this,” Manilow says. Sussman adds, “This show is, in part, about human beings getting together and learning how to collaborate. It’s about harmony in the broadest sense of the word. And the approaching storm of the era.”

Another storm, in the form of 9/11, stopped Harmony in its tracks. “After La Jolla, everybody was gung-ho to bring it [to New York]. Then the producers got bought out by another company and they shifted their focus. After 9/11 what producers wanted was light, the Twinkies and the junk food. What they didn’t have was the bread and butter of musical theater,” Sussman says.

This isn’t Manilow’s first experience with musical theater. There was Copacabana – the Musical, which he and Sussman did first as a TV movie in 1985, as a show in Atlantic City in 1990, and as stage musical beginning in the UK in 1994 before hitting the US in 2000. “Copa had been such a huge hit record,” Manilow says.  “It was a movie, a TV show, a breath mint, a suppository, a laxative. Copa has been everything.”

Long before that, Manilow had written his first musical in the early 1960s. “It was called The Drunkard,” he says. “I was working as a mail boy at CBS. A news director was putting on an off-Broadway version of this melodrama that he wanted to make into a musical. He was using public domain songs. And being the pushy New York composer, I would bring in an original song to replace one of the public domain songs. Then the first year it turned into an original musical and ran for eight years. I got a $64 royalty check last week.”

Randy Newman, Paul Simon, and Trey Anastasio (of the band Phish) are but a few of the pop singers who have written shows for Broadway with little success. Are Manilow and Sussman concerned about the track record? “There’s one big difference,” Sussman says. “Barry and I were born of the theater. I was looking for a theater composer and we started working together. We were sitting there with our yellow legal pads sketching out shows. Then something called Mandy happened. Thank God for it, but it took us away from what we wanted to do. We know this world. We love this world.”

If Manilow is nervous just prior to the big opening, he doesn’t show it. “It’s the most entertaining thing I’ve ever been involved with. If [my fans] love the fact that I am full of emotion, then that’s what on stage. It’s all about feelings. It’s moving. It’s everything that I’ve been trying to do with my own little world of pop music only blown up into a Broadway musical.”