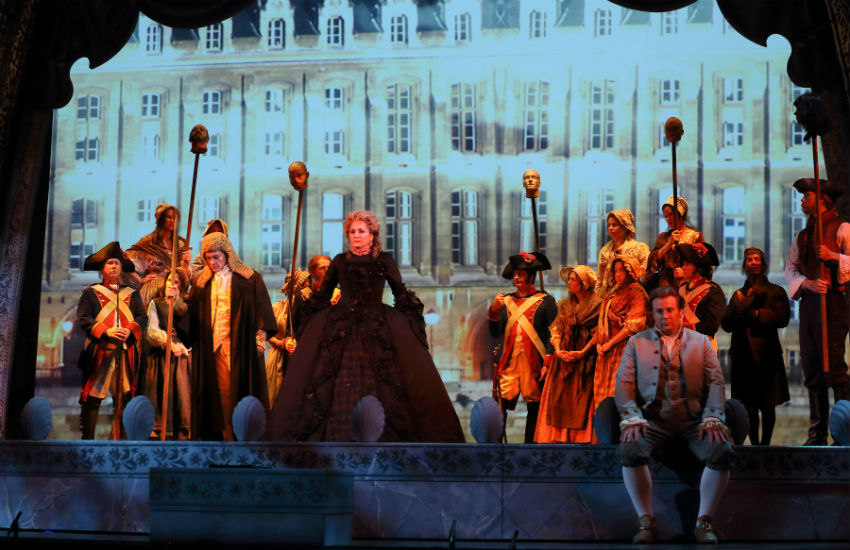 The Figaro trilogy features three operas inspired by the works of Beaumarchais. Two of them are very well known: The Marriage of Figaro by Mozart and Rossini’s The Barber of Seville. The third opera, The Ghosts of Versailles, is by composer John Corigliano. He is best known for his First Symphony (performed last March by the L.A. Philharmonic), which was his response to the AIDS crisis and for his Academy Award-winning film score for The Red Violin. The production opens Saturday at the Dorothy Chandler Pavilion marking the first full-scale mounting of Corigliano’s opera this century.

“It was really stepping into the noose and tightening and always jumping off the chair,” says Corigliano by phone about his decision to create an opera using some of the same characters that appeared in the two other beloved operas. “I knew that one could never compare oneself to geniuses like that. I was not trying to ever be compared with that. It was just like when you write a string quartet you have the Beethoven String Quartets looking down at you and it’s impossible to write a note. I had to get over that.”

The opera came about as a commission from the Metropolitan Opera in New York for its 100th anniversary. The Ghosts of Versailles didn’t debut as planned in 1983. It was first staged eight years later in 1991. “I spent 12 years from commission to first performance. It was a long road. What we found is that the libretto of the play was not going to make it into an opera. I asked [librettist] William Hoffman to come up with something as a foil to the classicism. He said, ‘I could give you dreams or ghosts in which there is no time or place and you can write anything.’ So that’s how TGOV started.”

In the opera, ghosts occupy the theatre at Versailles. Marie Antoinette, not too happy about her execution, spurns the advances of Beaumarchais. He offers his new opera, A Figaro for Antonia, as a means to win her love and change her fate. Now an opera appears within the opera, utilizing the familiar Figaro characters.

“We were going to have act one in two separate worlds,” Corigliano says. “In act two we were going to merge those two worlds into second worlds. This one has a big cast. Because it’s an opera within an opera it makes it expensive to do. I’m not talking about the extras, I’m talking about leading characters. It makes for a wonderful evening, but financially it’s tough. We haven’t had performances all over the place. The Met brought it back, but won’t anymore because it’s too expensive.”

In spite of limited performances since The Ghosts of Versailles first premiered, Corigliano isn’t deterred. “I’m working on an opera of all things. I’m working on it without a commission. It was originally commissioned by the Met, but midway through the writing of the libretto, [General Manager] Peter Gelb decided the subject matter didn’t appeal to him and that we should change it and take out the major character. We couldn’t do that. We had to withdraw the opera. I will simply write the opera and see who wants it. I finished act one and I’m working on act two. L.A. Opera is very interested in my work and they said ‘if you want to write anything, come to us.’ I will go to them. When the time comes.”