Home Theater Curtain Call: As He Stars in a Play About the Pope, David... 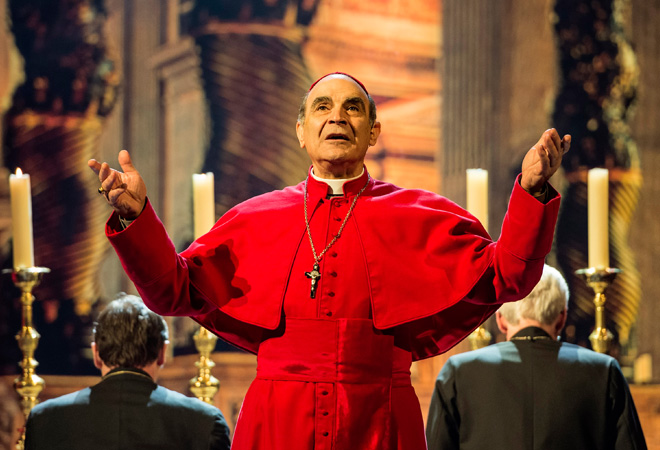 The death of Pope John Paul I in 1978 after only 33 days as the head of the Catholic Church has intrigued storytellers and true crime fans, alike. Francis Ford Coppola used it as a subplot in The Godfather III. Roger Crane, a lawyer, uses the Pope’s sudden death and the search for his replacement as the backdrop for his first play, The Last Confession. Though more than just a whodunit, it stars David Suchet, an actor who’s famous for his performance as inspector Hercule Poirot in 74 episodes of Masterpiece Mystery!

In this case, Suchet isn’t playing an impeccably groomed Belgian detective; he’s using his little grey matter to look into whether or not Pope John Paul I was murdered. He plays Cardinal Benelli, a man who was considered the Pope’s possible successor but instead rallies support for cardinal Albino Luciani (Richard O’Callaghan). After John Paul’s death, Benelli is relentless in pursuing the truth until it butts heads with his own aspirations.

The Last Confession debuted with Suchet in the central role at the Chichester Festival Theatre in England in 2007. He’s revisiting the play for a tour that began in Toronto and travels to Australia after the show ends its run in Los Angeles. “I’ve just had lunch with my playwright,” says Suchet. “He told me it changed radically from 2007 because of my own faith journey. It’s not just being a Vatican whodunit with the actor who played Poirot heading the investigation. It’s much deeper and more complex. This is an angry man, a frustrated man, and a man full of faults that he’s able to admit. He’s a man searching for true faith within a huge corporation that is ruled by power and money, which is called the church. Benelli’s weakness is pride; if he can become Pope, even without faith, he’ll still go for it.”

Suchet, who converted to Christianity in 1986, sees parallels between his own life and that of the character he plays. “I’m also a Christian who has been through the same crisis in his own faith as you see Benelli go through in the play. I read the bible, devotionally, and I also study it. And I struggle to find an organized church that can reflect Christ. I don’t say that lightly. I say that honestly. I think the problem with organized religion is that it’s lost its way. It’s become too bound up, as you have seen in the play, with money and power. One wonders if that should be where the church, the bride of Christ, should be in the modern world.”

Our conversation, like many that Suchet says he receives in letters, thrills him because it provokes audiences to think and discuss. He likens his experience in one of David Mamet’s plays to The Last Confession. “Oleanna is a wonderful play and it really manipulates the audiences and gets them wound up and talking about the play afterwards. This is the only other modern play that does that, too. If I’m in a new play that can both entertain and challenge enough to be talked about and chewed over afterwards, then I’m in a very special piece.”

When The Last Confession opened seven years ago, there was no Pope Francis, the current pontiff who is known for his humility and advocacy for the poor. These days, a play about a Pope who’s willing to shake up the Catholic Church is mirroring reality. “I think what Francis has done, fortuitously, is to make [the play] more relevant than ever,” Suchet says. “The character of John Paul I, Albino Luciani, is very similar to the present Pope. And one wonders what might have happened way back in 1978 that is happening now in 2014 because from 1978 until 2014, nothing has changed.”

Suchet last appeared on L.A. stages in 1999, when he played Salieri in Amadeus at the Ahmanson. He’s glad to be back and to be doing this show. “It’s a wonderful role,” he says. “This is a great modern role for an actor of 68 years of age coming into his seventh decade and 46 years in the business. To be given this play is a gift. I’m very grateful.”