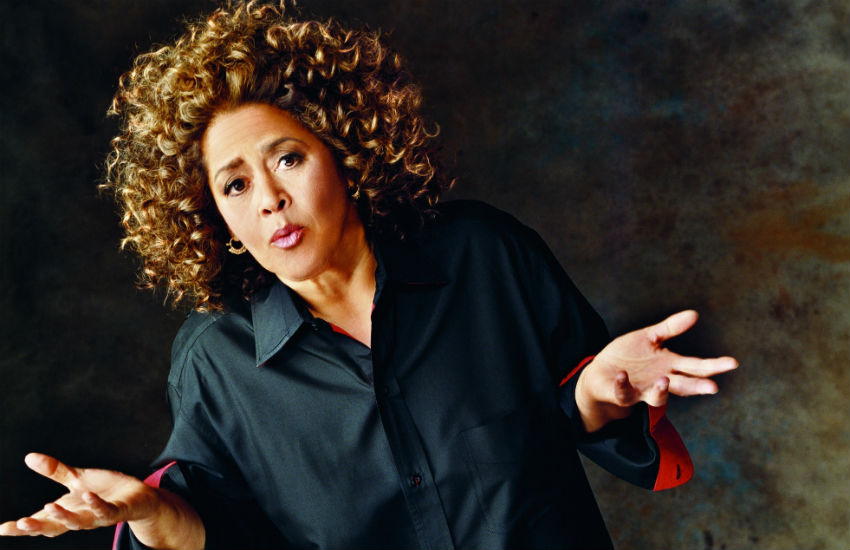 “I wouldn’t talk about this as a show, but as an evening,” Anna Deavere Smith says of NEVER GIVIN’ UP, which opens tonight at the Broad Stage in Santa Monica. “I’m doing a reading of Dr. King’s letter and presenting some other quote unquote characters I’ve interviewed.” Joining her will be violinist Robert McDuffie and pianist Anne Epperson. “It’s more in vein of what a concert would be like. We are three artists who have come together to engage and delight the audience that will be there.”

Smith, who portrayed Dr. Nancy McNally on The West Wing and Gloria Akalitus on Nurse Jackie, is also a renowned playwright. Her one-woman show TWILIGHT: LOS ANGELES, 1992 was a highly acclaimed look at the riots that occurred in Los Angeles after the Rodney King trial. The play was nominated for a Tony Award for Best Play, and Smith earned a nomination for her performance.

NEVER GIVIN’ UP continues Smith’s examination of race relations, but also expands into some new territories. “I think we have a lot of work to do,” says Smith. “What civil rights is ultimately about is racial and economic justice. One of my interests right now is trying to raise awareness of the lack of equality in education. Some people would tell you it’s not just a rich/poor gap, but the wealthy are pulling away from the middle class. The middle class has a harder road to take care of our kids. Our education systems are afraid. We’re also making the mistake to think that there’s nothing about just knowing something that is useful. We’ve gutted the very things we need in order to respect each other’s humanity.”

Dr. King’s letter, which he wrote in 1963 while in jail, argues passionately about the need for non-violent response to racism. Smith finds a resonance in the letter that suits our world today. “The idea he puts forth is that law and order should be used to establish the purpose of justice. When they fail there is great danger in terms of other problems of social justice. I think overall that the idea that Dr. King was trying to bring forward is to save the people who are on the wrong side of segregation: poor people, black people and other people of color–saving them from this degenerating sense of nothingness. Everybody has dignity and everybody matters.”

The world of the theatre tends to be, by Smith’s own admission, a “largely liberal environment.” But that doesn’t inhibit her when creating new works. “Just because they are sympathetic doesn’t mean they don’t need to hear the message. Just because you are on that side of the aisle doesn’t mean you don’t need a good dose of inspiration or courage to come away more inspired and more committed. I do strive–and I don’t think I’m successful–but I do strive to have a more ecumenical audience. I do also provide enough points-of-view that not everybody believes. They are also strangers in the dark. They don’t know each other. Hopefully somebody in there turns to someone they don’t know and asks, ‘why are you laughing,’ or ‘why did you cry?’”

L.A.’s Longest-Serving Politician Is Cautiously Optimistic That This Is a Moment of Change