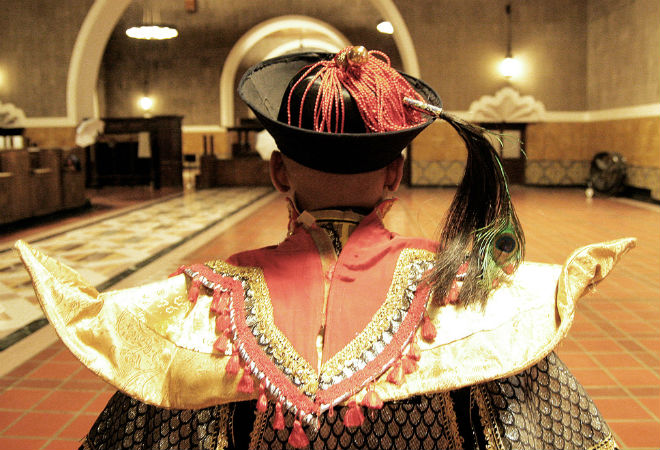 Invisible Cities isn’t your parents’ opera. There’s no orchestra pit. There’s no stage. There’s no front row. Instead, the production, which is based on an Italo Calvino novel about an imagined conversation between emperor Kublai Khan and explorer Marco Polo, is being performed in the middle of Union Station. The man responsible for staging it is Yuval Sharon, artistic director of The Industry, a company that bills itself as “a new home for opera in Los Angeles.” The troupe made a splash last year with its acclaimed “hyperopera” Crescent City, which they staged at another non-traditional space, the creative complex Atwater Crossing.

For Invisible Cities, you begin your journey in Harvey House, a restaurant space that houses the orchestra. From there, you follow whichever characters you like as they walk and sing through Union Station. Along the way you might encounter other singers, dancers, and most certainly the general public. And the whole time, you’re wearing headphones that amplify the musicians and the singers.

“Los Angeles is the inspiration for the work that I’m doing with the Industry in every way,” Sharon explained on the phone during a rehearsal break a few days before opening night. “Doing the opera at Union Station reflects that. It is an icon of Los Angeles that honors both the architecture and the city itself.”

But who stages an opera in a train station? “Composer Christopher Cerrone proposed the work when I was project director at New York City Opera’s VOX. The inner life of the music had to be made manifest on a stage. Calvino’s novel is more a piece of philosophy, a tone poem rather than a novel in the traditional sense. The opera is very quiet. Singers sing at low volume for most of the opera. You want to feel that the characters are singing in your ear.” It was then that the idea of using headphones and roaming around a large physical space was born.

“What you are hearing has no connection with what you are seeing,” Sharon says. “You have the opportunity to create relationships between eyes and ears. The book is fundamentally about what happens to us internally when we face a journey anywhere in the world. How much external reality is just a reflection of what’s happening with us. This was the perfect way to realize the piece that Christopher had been trying to create.”

The only thing missing was the location. “I started thinking where was a place the audience could move freely? Where could we do an intervention that wouldn’t disrupt daily life? The romance, the beauty around Union Station—you are instantly back in 1939 imagining the past in L.A. All of this speaks beautifully with the themes of the book and the opera.”

While the opera is being performed, trains continue shuttling passengers to and from the City of Angels. “Everyday life is a crucial part of the way the piece works. The life of the station, the people, and the subtle displacement are key elements,” Sharon says. “We are used to having our physical and mental reality not necessarily reinforcing each other. We carry so much in our phones.  As our lives get so digitized, these experiential type of performances resonate very deeply because they are something that our phones can’t do. The headphones and the public space are not the show. They are the means to experience a really beautiful opera.”

If the day-to-day hustle and bustle of Union Station isn’t enough, on Halloween there’s another level of engagement. “The life of the station on Halloween is going to be so electric. Costume designer E.B. Brooks and I had the idea of having a costume contest. It doesn’t change the nature of the performance at all. The creative act does not reside only by the artist. It is the spectator that is doing creative work with the artist.”

The City’s Own Avenging Angel Returns to the L.A. Opera