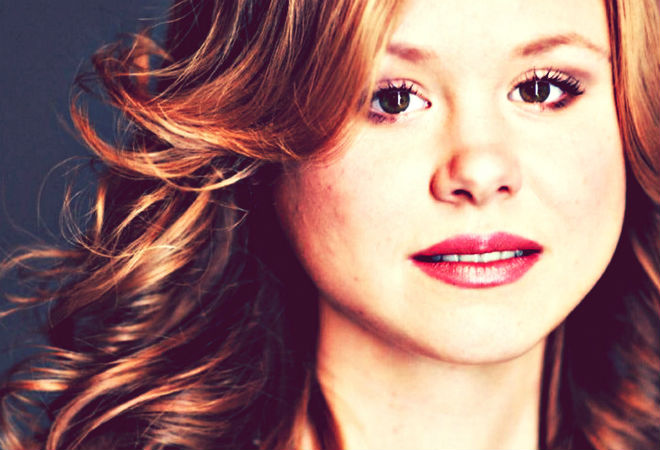 It is unlikely that during her childhood in Toronto actress Alison Pill (The Newsroom) ever thought that one of her favorites movies, Wait Until Dark, would be the first play she did in Los Angeles. But tonight she opens Jeffrey Hatcher’s new adaptation of Frederick Knott’s thriller in a role made famous by Lee Remick on stage and Audrey Hepburn in the film.

“I watched the movie a bunch when I was a kid and loved it,” she said prior to a rehearsal at the Geffen Playhouse. “It would just be playing. It’s so scary and wonderful. It’s both psychological and jump-out-of-your-seat scary. Frederick Knott knows his thrillers.”

In the play, Susan, a blind woman, is terrorized in her apartment by several men operating a scam. “The first scene, if you’re playing close enough attention, you’ll be able to clue in to what’s about to happen. From that point on, you just take off.” As for playing a blind character, Pill says, “Being blind and running around in sequences, blackouts, and everything, it’s just inevitable that you will get hurt.  I’m covered in bruises. That’s something you have to accept.”

“What I love about my character Susan is that she is mean, she is funny, she’s annoyingly vulnerable at points. I love playing complicated women who if you met on the street you’d be, ‘Is she a bitch or what?’ Usually a heroine only gets to be one thing: You’re the likeable heroine. Susan’s an okay person, but she’s not a great person. You get why.”

Not that theatrical productions with violence or blindness are new to her. She was Tony-nominated for her performance in Martin McDonough’s The Lieutenant of Inishmore and appeared in a revival of The Miracle Worker. Pill may be on a hit television series, but her heart is clearly in theater. “Being in a rehearsal rom is my favorite place to be. Over the course of three weeks how it falls apart and comes back together, ends before it starts. It’s just the best process ever.

Asked if the challenge of conveying Aaron Sorkin’s dialogue in The Newsroom offers anything similar, she says, “We get a table read two days before we start shooting. Then we run it on set while there’s an entire crew setting up. In this play, there are so many logic follow-through questions and getting the arc of the action and the plot. You think 50 pages ahead. You don’t have that kind of time in television. Such is life.”

Is there more life in The Newsroom?  “It’s up to Sorkin. We haven’t heard. If we do, I hope we get to cover some stuff that happened this year–specifically make it about guns. We cut it right before Sandy Hook. Jane Fonda thinks it’s happening. She’s determined and I wouldn’t say no to Jane Fonda.”