Home Theater Curtain Call: A Pair of Elders Believe in the “Book of Mormon” 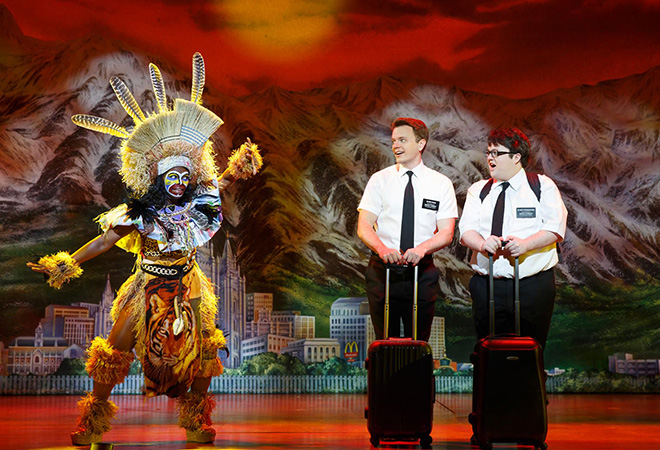 Playing the roles of Elder Price and Elder Cunningham in The Book of Mormon has paid off nicely for its lead actors. Andrew Rannells, who originated Price, has become a regular on HBO’s Girls and was a lead in last year’s short-lived television series The New Normal. Gavin Creel, who played Price in the show’s first U.S. tour, is now an Olivier Award nominee for his performance in the London production. Josh Gad, who originated Cunningham, has appeared in numerous roles and was the voice of Olaf in the smash film Frozen. Clearly this show can take you places.

The roles of Price and Cunningham are being played at the Pantages Theatre by David Larsen (Hands on a Hardbody) and Cody Jamison Strand (who appeared in Book of Mormon on Broadway). These two guys couldn’t be more different and less like the characters they play. “We get along like apples and oranges,” Larsen says. “Very different but they’re both fruit and they both go together. And they are great with breakfast.”

In the show the two play Mormon missionaries who are sent to Uganda to convert the locals. Price, the golden child, is paired with Cunningham, a loudmouth prone to exaggeration. It’s not an ideal location or an ideal pairing. With South Park creators Matt Stone and Trey Parker as writers this isn’t a tame musical. The show’s outrageous humor is part of its appeal.

“The good thing about this material is its jokes,” says Strand. “Keeping laughs fresh is easy because you have a new audience every night. Them hearing the joke for the first time makes you feel like you are telling it for the first time.”  Larsen elaborates on the level of spontaneity this allows. “They give us a very structured framework to work within. Just a slightly different inflection on one line could make you say a line slightly differently, and Cody and I are really synching into that.”

For a show that revolves around the jokes, the music can appear to be easier than it really is. “People watch from the audience and it doesn’t seem too difficult, but when you try to do it eight times a week that’s where you see the different between a professional and an amateur,” Larsen says.

Strand has his own challenges with the songs. “The range of the part, it really goes all over the place. I don’t have that big of a range for my voice anyway.  My voice his higher pitched than a lot of people’s. My bottom note is a middle C.”

Both actors saw the show early in its Broadway run. Larsen, who was in Billy Elliot at the time, called on his friends who were in the show to get him in.  Strand bought tickets in advance of a trip to New York his senior year in college. “I saw the show and I went, ‘Oh, that’s funny. That guy [Josh Gad] looks like me,” he says. “I saw the show in May of 2012 and then I was cast in the show by the end of the year.” When Larsen learned he’d won the part, he was in the same perfect place that his character hopes to be sent on a mission. “I found out about getting the show while I was at Disney World in Orlando. I thought it was apropos for the piece.”

This tour will last a year and then Larsen and Strand hope that opportunity knocks for them as swiftly as did for their predecessors. “I would hope that it would lead to creating an original piece,” says Larsen. “I’ve been lucky enough to be a part of three original shows on Broadway and that’s my true love.” As for Strand, he has his eyes set on the silver screen. “I always wanted to do movies. But who doesn’t want to do movies? All kind of movies. Jonah Hill movies.” When asked if he thinks he could do The Wolf of Wall Street, Strand replies, “No, not yet. I’d have to be skinnier.”