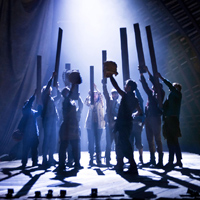 At the 2011 Tony Awards, War Horse galloped away with all six of the awards for which it was nominated including Best Play. This week, Tom Morris, who co-directed the show with Marianne Elliot, is bringing the Bristol Old Vic production of Shakespeare’s A Midsummer Night’s Dream to the Broad Stage. And he’s invited his most popular collaborators from War Horse, Handspring Puppet Company, to tag along.

One of the Bard’s most popular plays, A Midsummer Night’s Dream is set in a forest where fairies control two pairs of lovers and several amateur actors in the runup to the wedding of Theseus and Hippolyta. It has intrigued directors including Peter Brook, Julie Taymor, and Peter Hall, all of whom have put their own spin on it. “The text is about the tricks that imagination can play on you, about how powerful an imagined world might be,” says Morris. “This made the play a really exciting environment in which to ask an audience to imagine life, which is what you do when you’re confronted by puppeteers bouncing around pieces of wood and trying to tell a story to make [it seem like the puppets] are alive.”

Ah, yes. The puppets. Whether or not people liked War Horse, it seemed like everyone was charmed by the puppets—and by the performers who brought them to life. The show was so successful that another collaboration was inevitable. Morris explains, “We wanted to work together again on something after War Horse, but it would be a terrible mistake if it was anything like War Horse. Adrian [Kohler] and Basil [Jones] had designed some puppets for a production of A Midsummer Night’s Dream in South African in the 1980s and we chatted about those and the play. We got interested in the thematic relation of puppets to this text.”

“One of the challenges with the play is the question of whether or not Shakespeare’s audience believed in a spirit world,” says Morris, “and different scholars say different things about this. In our production, the spirits are in the forest of Athens, which for Shakespeare’s wedding takes place on the hinge of a pre-civilized world in Ancient Greece. Hippolyta has been carving images so the spirits will attend her wedding. The spirits essentially inhabit these figures and all sorts of objects that are available in the set. Some look like puppets, others look like other things that might have been possessed by spirits.”

In order to do the production justice, the actors must not only master iambic pentameter but puppetry too. “It’s a very special kind of actor you have to find,” says Morris. “It’s a show with integrated puppetry and also an ensemble show with only 12 people in it. Every single performer is on stage nearly the entire show. They have to handle the text and have no ego and be able to support each other and the story.”

Morris is quite clear that although this production and War Horse both employ puppets to tell their stories, that’s where the similarities end. “Some audiences get very emotional about Puck. He’s not a character you normally get emotionally involved with, but in our production he is created with a strange sort of puppetry. When he comes to life the audience imagines him as all kinds of things. Puck is a more perverse character than Joey in War Horse. In War Horse the target was very clear: to create a puppet that could carry the emotional burden of the story. Puck has no such story. Don’t come to one expecting to see the other or you’ll have a very confusing experience.”