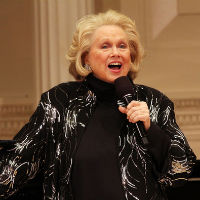 After the Governor’s Ball that immediately follows the Academy Awards, the toniest party in town may be the Actors’ Fund annual L.A. Tony Awards Viewing Party. It takes place annually at the Skirball Cultural Center. Each year the institution bestows the Julie Harris Award for Artistic Achievement on a performer known for his or her work in the theater. Previous recipients include Liza Minnelli, Lauren Bacall, James Earl Jones, and Harris herself. This year the honoree is Barbara Cook.

“You know, it makes me feel that people understood what I was getting at,” she says of the honor. “I particularly felt that with the Kennedy Center Honor. Thank God they get what you’ve been trying to do all these years. I put so much of my life in my work, I feel they are honoring my life as well as my work.”

The 86-year-old Cook began her career on Broadway in 1951 with the short-lived musical Flahoooley. She went on to originate the role of Cunegonde in Candide, Marian Parro in The Music Man (for which she won a Tony Award), and Amalia Balash in She Loves Me. With those roles came the opportunity to introduce such classic songs as “Glitter and Be Gay,” “Till There Was You” and “Ice Cream.” Cook is also acclaimed for a singing voice that has only gotten better with age. She performed her Mostly Sondheim show at the Ahmanson Theatre in 2003.

When asked to define her singing style, Cook pays homage to British cabaret singer Mabel Mercer of whom Frank Sinatra said, “Everything I know, I learned from Mabel Mercer.” Cook agrees. “What she did with words and phrasing was so unusual. She was one of the first people I saw when I first came to New York. It occurred to me if I could find what’s intrinsic about me, there would be no competition. Each of us is unique. Use your life experience. Only you hold those experiences. The truth is it makes you feel very vulnerable. But that’s exactly where you are safe. It’s not about you, it’s about the song. And the song does not live on the sheet.”

How much does acting inform what she does? “A great deal. More than I thought about in the beginning. People would say ‘You’re a really good actress.’ And I would respond, “What do you mean, I’m singing?’ Now when I work with young singers in my master classes I ask them to think of singing as dialogue.”

Cook’s most recent appearance in a Broadway show was in 2010’s Sondheim on Sondheim. For years she’s been praised for her handling of his very complicated songs. “I’ve said this a couple of times and he’d laugh if he heard me say this,” she says. “I think of him as you do Shakespeare, which is you continually find new things. [His work] is so rich. There’s so much there to use.”  Cook auditioned for the role of Sally Durant in the original production of Follies, “but obviously I didn’t get it,” she says with a laugh. “I’ve done very well with those songs. In Buddy’s Eyes is just a great, great song. Stephen said to me that I had resurrected that song. Which is very nice of him to say.”

There’s a modesty and a frankness about Cook that’s refreshing although self-confidence hasn’t always been her strong suit. “When I was younger, the moment I stepped in Los Angeles I felt ugly. All those beautiful young things around,” she recalls. “I don’t mind it as much now that I’m older.” When asked if she was aware that people were looking at Barbara Cook the actress and singer and not as she viewed herself, she says, “That’s a good question. I never think that people were talking about me if I’m not there. If I’m there, they’re being nice because I’m there. I don’t think of myself that way. Some friends say ‘You don’t understand, they love you. They love your work.’ I don’t feel I’m a big deal.”

Cook says that another Broadway show is not in her future. “I have back trouble. I have knee trouble. It would be too hard to rehearse during the day and work during the night.” That doesn’t mean she has given up performing. “The idea of retiring is the last thing on my mind,” she says. “Retire what? I want to sing. I feel so incredibly fortunate. A couple Wednesdays ago was the 63rd anniversary of the opening of my first Broadway show. Good gravy! I’m so lucky to still be singing and nobody has told me to fold up my tent yet.”