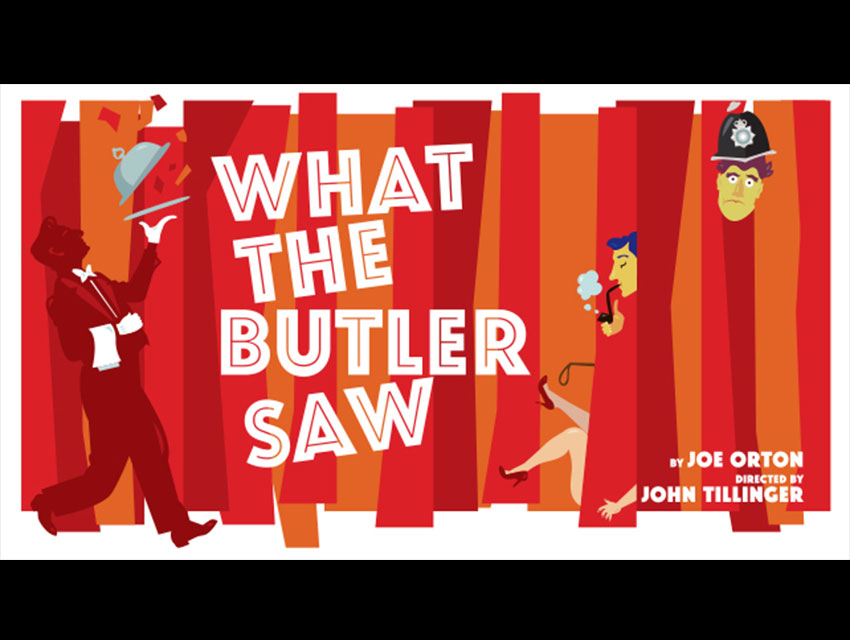 If you’ve seen the 1987 film Prick Up Your Ears, you’re familiar with the brief life and burgeoning career of British playwright Joe Orton. In 1967, just two weeks after delivering a new play dedicated to his lover, Kenneth Halliwell, Orton was murdered by Halliwell who then committed suicide. A new production of that play, What the Butler Saw, originally scheduled for last season, opens this week at the Mark Taper Forum.

Directing is John Tillinger who has had a long association with Orton’s work. He directed productions of the playwright’s Entertaining Mr. Sloan and Loot, both of which were performed in repertory in 1987 at the Mark Taper Forum. In the play, Dr. Prentice (Charles Shaughnessy) is interviewing Geraldine Barclay (Sarah Manton) for a job. Realizing she’s not a good candidate, he tries to seduce her instead. Those attempts are foiled when his wife (Frances Barber) walks in with Nicholas (Angus McEwan), a page from a nearby hotel, and accuses him of having sexually attacked her. Thus begins a play that skewers morality and authority in equal measure.

“The plot is very, very silly,” Tillinger says during a break in rehearsals. “Somebody is trying to seduce a young girl and his wife walks in and the clothes get mishandled. There’s lot of fun. But, there are taboo issues in this piece: rape, molestation, homosexuality. This is a very politically volatile subject today. And [Orton] wrote this play 50 years ago.”

Tillinger is aware of the challenges he faces in directing this play. “That old cliché dying is easy, comedy is hard,” he says. “It’s a huge challenge to get this right. The style of the writing is distinctive. He plots very carefully. There is logic. The language is so specifically Orton and nobody else.”

Orton often re-wrote his plays, but he had no opportunity to do that with What the Butler Saw. What changes does Tillinger think Orton might have made? “I think he might have edited it. You can’t tell with a genius like that. He might have simplified some of the permutations that go on during the play. On the other hand, he might have made it more complicated.”

After tackling Orton’s plays, Tillinger says he’s learned a lot. “The actors, those who have not played him before, have to realize which words to land on. What you can’t do is tell them what word; they have to find it themselves. It is hard work to keep the style and the context and the reality of the characters in the same room, in the same piece, in the same presentation.”

When it first premiered, What the Butler Saw was controversial given the subjects it presents. A lot has changed in fifty years. What does Tillinger think Orton would make of today’s world? “On certain levels he’d be pleased. He would have gone to jail for being gay. A lot of people did. He would be very pleased by that emancipation. The callousness of the world would troubled him. The world that he grew up in and he wrote in was very hypocritical. It is now much less hypocritical. On the other hand, we’ve picked up plenty of other hypocrisy.”

Returning with Orton’s work to the Mark Taper Forum after so many years, how does Tillinger think audiences will respond to What The Butler Saw? “When this was canceled last year there were a lot of people who complained because they were looking forward to an Orton play. There is a built-in audience. I can’t say a subscription audience here is dying to see Orton, but they did twenty years ago. They either like him or they don’t. It’s not for everyone. Then again, some people don’t like Neil Simon.”