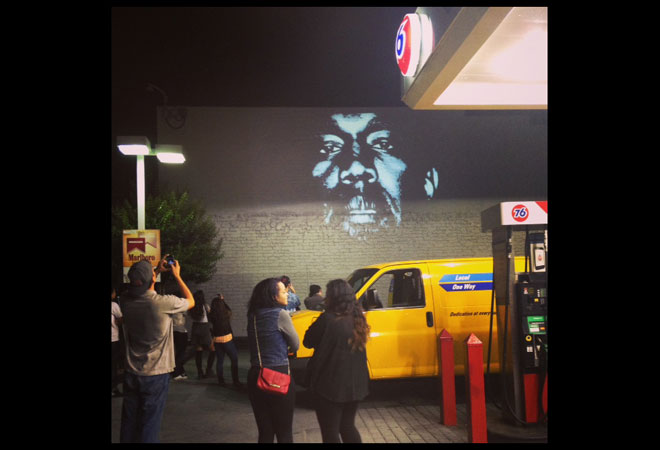 –A statue of Bruce Lee was unveiled in Chinatown [LA Times]
—Curb Your Enthusiasm actor Jeff Garlin was arrested over a parking dispute [ABC7]
–How Pixar developed the art for Monsters University [NY Times]
–Jay-Z’s  Magna Carta Holy Grail drops July 4, but a million people will get it for free before then [WSJ]
–Superman reboot Man of Steel crushed all box office contenders but… [Deadline]
–…Community showrunner Dan Harmon loved apocalyptic stoner comedy This is the End, which took second place at the box office [Twitter]
–British food hottie Nigella Lawson got choked by her art collector hubby Charles Saatchi during a violent argument [Mirror]
–The pope blessed a bunch of Harley Davidsons at the Vatican [The Independent]
–In the New York Times: artist of light and space James Turrell, who has a major show at LACMA, on the cover of the Sunday magazine; local girls made good, Alie and Georgia, in the Arts & Leisure section for their new TV show, Tripping Out with Alie & Georgia.

And…
If you drove past Las Palmas and Santa Monica Blvd. on Saturday night, you might have spotted what looked like clips from Kanye West’s forthcoming album, Yeezus, being projected onto the wall of the 76 gas station. The album officially comes out tomorrow but it was leaked last week. Meanwhile, Kanye’a special lady also released a new project into the world: She gave birth to their daughter this weekend. [USA Today]