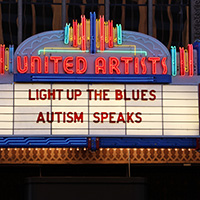 Nearly 1,600 people packed the United Artists Theater at the Ace Hotel on Saturday night for Light Up the Blues a benefit concert for Autism Speaks. (April is Autism Awareness Month.) Hosted by Stephen Stills of Crosby, Stills and Nash and his wife, Kristen, the event raised more than $320,000 that will go to research, awareness, and support for those affected by autism. After receiving an invitation via text message from his Anchorman co-star Christina Applegate, actor David Koechner and his wife Leigh agreed to emcee the show as well as the auction, which featured guitars signed by the night’s heavy-hitting headliners: members of CSN, Don Felder of the Eagles, John Mayer, and Brandi Carlile.

“When any people of influence, whether it’s pop culture or politics, lend their names and their voices to this cause, it invites others to come out and do the same thing,” said Liz Feld, president of Autism Speaks. “Awareness is about education. It’s about letting everyone know that autism is a national public health issue and it needs to be a priority.”

“Having schlepped to a lot of benefits myself at their request, I’m absolutely thrilled that they’ve all come tonight,” Stephen Stills said of his fellow artists. “Especially John Mayer. We got to play together today and it got big smiles out of both of us.” Stills’s son, Henry, has autism, and that’s what sparked the musician’s passion for the cause.

Actors including Koechner, Christina Applegate, Dax Shepard, Kristen Bell, Gary Cole, and David Marciano walked the blue carpet alongside performers on the autism spectrum, some of whom would later share the stage with the iconic headliners for a two-and-a-half hour set of original songs, classics, collaborations, readings, and incendiary blues guitar jams.

“That’s one of the things I love about Light Up the Blues,” said Stills’s son, Chris, who also performed. “We’re playing with autistic people, encouraging the idea that we should see through the disability and not be afraid of it. Inside, these kids and adults are amazingly talented and beautiful people.”

Their performances were perhaps the most awe-inspiring of the night. Cellist Adam Mandela Walden gave a stirring rendition of a Mozart composition while rapper Rio “Soulschocka” Wyles rhymed his way to a standing ovation. Neal Katz, a non-verbal man with autism, used text-to-speech technology to encourage people to listen to those with special needs.

“It’s 1 in 68. That’s pretty impressive math,” explained Matthew Asner, the executive director of Autsim Speaks for Southern California. “We all need to step back, take a look at that number and realize this is one of the most important issues of our day.”

Koechner, Cole, and Marciano all have children on the spectrum, while Applegate said she’s a lifelong friend of the Stills family: “I love their boys. It means a lot to me to be able to be here supporting them and all the kids afflicted with this disorder,” she said on the blue carpet. Dax Shepard costars on NBC’s Parenthood, which has received praise for its relatable depiction of raising a child with Asperger’s Syndrome.

While scientific research is an important component of Autism Speaks, awareness was the focus of the evening. Even Shepard said that autism is a “big, big, big issue” that flew under his radar until he was cast on Parenthood, but now he understands some of the challenges these families tackle. A big part of those challenges, several actors echoed, is the issue of inclusion.

“It’s hard to go out into the world with my son,” said David Marciano of Showtime’s Homeland. “It’s like we live in a bubble. People look at you. All we want is for people to come up to us and say, ‘Hi. What’s your son’s name?’ Treat us like I would treat you. It happens because they’re scared and they don’t know what to do. All anybody wants is to feel loved. As a community, we feel kind of on the outside. It’s happening, though. Slowly, it’s happening.”

Part of the Light It Up Blue campaign is to encourage simple acts of kindness. Teaching children to be inclusive and empathetic, Feld said, especially at school, is a simple way for the average person to affect real change close to home.

“There’s going to be autism forever. It’s how we deal with it as a society that needs to change,” Koechner said. “Autism may possibly be the thing that propels us as a species. When you think about it, Einstein was probably spectrum. You don’t want to change that. You don’t want to ‘fix’ that. It’s just another part of humanity we all have to be aware of.”

A documentary on last year’s inaugural Light Up the Blues concert, featuring CSN, Felder, Lucinda Williams, and other, is available on iTunes.